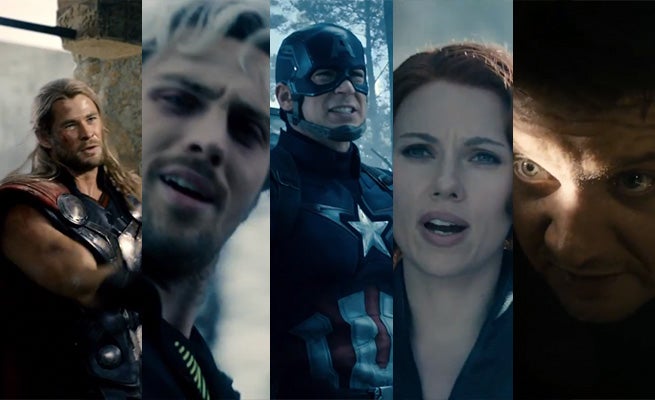 NCAA's March Madness tipped off today and with that opening tip came brand new Avengers: Age of Ultron footage (in the form of a new TV spot). The footage showcased a bunch of awesome new moments, but it also gave speaking parts to characters we're not so used to hearing from.

This time around, we've picked the five best lines from the latest footage.

Quicksilver speaks! If you listen to it, you'll hear he has an accent. In the comics, Quicksilver grew up in Wundagore, alongside his twin sister Wanda (Scarlet Witch). As many of us know, the rights to Quicksilver and Scarlet Witch for movies are split between Marvel/Disney and Fox, so there are different versions appearing in the X-Men films and Avengers films. The twins' back story may be altered a bit considering they already can't be mutants or children of Magneto.

This bit of Captain America using an electric Harley Davidson as a lethal weapon also qualified as one of the awesome moments, but Cap showing a sense of humor and taking us back to Marvel's humorous, yet action-packed style of story-telling is delightfully refreshing.

Thor was seen in the same montage using his hammer to hit a home run with Captain America's shield, taking out a chunk of Ultron's army. Here, we get another bit of humor from our beloved Avengers as Thor tells Cap, "It's all in the swing." Maybe he got Hulk back for that punch in Grand Central Station.

"If you step outside that door, you're an Avenger." Hawkeye is finally getting the chance to be a hero after being dominated by Loki's mind control for most of the first Avengers. The cut of the new trailer makes it apparent that he is talking to Quicksilver and Scarlet Witch, but it's also a possibility that he's giving a pep talk to a scared child or other person in danger.

Here we've got Black Widow looking to the Hulk (or Bruce Banner) and saying, "Hey, big guy." Why is that important? Because with each new piece of footage we get more and more into the possibly romantic relationship between Bruce and Natasha. Talk about a power couple.

Which line was your favorite from the new Age of Ultron footage? Have you already bought your tickets to check out the next installment to the Marvel Cinematic Universe?

Avengers: Age of Ultron blasts into theaters May 1, 2015.