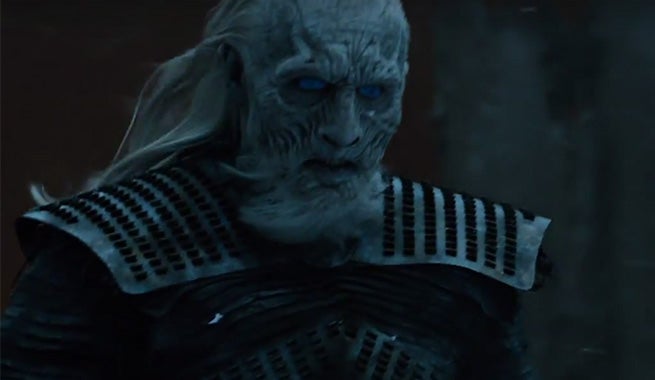 Tonight's episode of Game of Thrones really got the blood flowing. Any audience left unsatisfied: clearly, there is no pleasing you. Director Miguel Sapochnik, who also helmed last week's "The Gift" episode, delivered one of Game of Thrones' best episodes in "Hardhome." Politics, brutality, and battle conquered our screens on this Sunday night as Winter's presence was felt more than ever.

We've compiled a list of the five best moments "Hardhome" had to offer below but be warned - SPOILERS follow if you haven't yet watched the latest episode of Game of Thrones.

Cersei Drinks From The Floor

Cersei has been one of, if not THE most hated character in Game of Thrones since it's very first episode over four years ago. She always seems to come out on top. She might this time, too, but for now we get to watch her suffer in a dark cell. The best part: she mocked Margery Tyrell's imprisonment last week only be tossed in a cage herself and treated like an animal moments later.

Watching the conniving, manipulative, moral-lacking ex-queen crawl on her hands and knees to slurp water off of a prison cell floor was ever-so-rewarding.

Last week, Tyrion and Daenerys were introduced to one another. They both knew a good bit about each other prior to their face to face encounter but until "The Gift," had never shared the screen. When the two sat down this week it made for some great conversation.

Daenarys seems to have a vision for a better world but also tends to live in a fantasy world about how to achieve it. Tyrion, on the other hand, is typically as pessimistic as Daenerys is positive but knows the ins and outs of politics, persuasion, and conversation in ways Dany couldn't even bluff. Tyrion very much had the upper hand while the two chatted privately. With Tyrion as her advisor, Daenarys will likely see much more success in dealing with civilians and kings alike.

Finally. How many times did you yell at your screen for Reek to tell Sansa that he didn't actually kill her brothers? Not that Sansa should just go ahead and forgive Theon for the way he betrayed Winterfell and her family to begin with, but this seems to be the first sign of Theon getting on the road to redemption and possibly helping Sansa get away from Ramsey if Stannis can't.

A masterful bit of television concluded the final quarter of this week's episode. Jon Snow reasoned with the unreasonable Wildlings, attempting to join forces in an effort defeat the impending White Walkers and their Army of the Dead. Some joined while others refused...that is until said army showed up. The Wildlings were pitifully outmatched and had no choice to fight alongside the men of the Night's Watch.

The effects were outstanding, the choreography top notch, and the series of events unthinkable. Jon Snow displayed some impressive sword work which we really need a gif of. The wights (zombies) were comparable to those of 28 Days Later or World War Z. Completely mindless killing machines. The battle struck every adrenaline nerve in the human body.

Finally...the White Walkers made their season five debut and boy, oh boy, was it epic. As mentioned in the previous moment, they showed up with an army of wights and unleashed chaos on the Wildlings and the select few members of the Night's Watch. We were treated Jon Snow vs. a White Walker. Snow got tossed around at first but eventually used the sword made from Valyrian steel to shatter the White Walker into bits on the ground.

Even more important than the fighting was the first appearance of The Night's King - that one White Walker with a bit of a bone-like crown protruding from his head who raised his arms and awoke the dead. Hopefully the White Walkers are explored in more detail before season five concludes but in each previous season, they've only made one appearance. Perhaps we shouldn't get greedy after such an intense, epic scene involving the mysterious creatures of Winter.

What was your favorite part of Hardhome? Do you think Denaerys and Tyrion can team up to rule Westoros or perhaps unite all the Kingdoms to fight the White Walkers? There are only two episodes of Game of Thrones remaining this season!