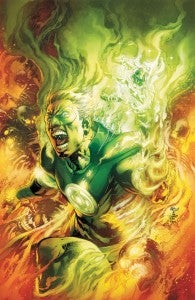 While we have had our own theories about Shazam being a likely candidate as the DC Comics superhero that will be re-introduced as gay, the most popular choice by far online appears to be Alan Scott, who is the Earth 2 Green Lantern. The rumors we heard about Shazam came well before it was officially announced that an iconic DC Comics character would be re-introduced as gay, but the Green Lantern rumors apparently are coming from more recent sources, so maybe they are more valid. There are several compelling arguments as to why the gay Green Lantern theory could be true. 5. The way the news broke points to it possible not being as big a deal as it is now being made out to be. If no one had asked Dan Didio a question about gay characters at Kapow, then we probably wouldn't even be reading about this story now. Over the years there have been a number of alternative Earth type stories, so it's not as big a deal when one of those characters turns out to have a different race or sexual preference. 4. Why wouldn't Earth 2 have a gay superhero? Considering that an entirely new world is being introduced, it's only natural to assume that there would be heroes of different races, religions, and sexual preferences. 3. Green Lantern is definitely an icon. Thanks to last summer's Green Lantern movie, he's probably one of DC Comics best known superheroes after Superman, Batman, and Wonder Woman. It's a name that will hold more recognition than say Atom or Elongated Man. One could also argue that since Alan Scott was the original Green Lantern that he's the most iconic of the bunch to wear the ring. 2. The timing is right. DC Comics just launched the first issue of Earth 2 in May, and the second issue is coming out in June, when the storyline involving the gay character is supposed to start. While Alan Scott has already been introduced, he has yet to be introduced as the Earth 2 Green Lantern. 1.Several news sites have run stories citing sources as pointing to the Earth 2 Green Lantern Alan Scott. While the stories were originally ran as rumors, where there's smoke there's often fire. Bleeding Cool is even calling it officially as Alan Scott now, and when it comes to DC Comics, they've definitely proven in the past to have the inside track with everything from Before Watchmen to zero issues. If it is true, it will be interesting to see how it plays out. The various alternate earths aren't something that is easily explainable to the general public. Because it has generated so much media coverage, we could see news outlets struggling to explain how this Green Lantern is different than the one played by Ryan Reynolds in the movie. And of course, if a Green Lantern 2 movie ever does get greenlit (which seems unlikely given the box office of the first one), then it's a question Reynolds will face on every single talk show he does. The news is also already creating some backlash among fans because Alan Scott was the father of Obsidian, who was a gay character in the old DC Universe. Now, it's possible that DC Comics will still find a way to introduce Obsidian into the picture, but for now the perception has been that DC is trading out one gay character with a new gay character.