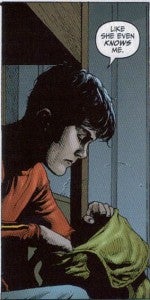 So everyone is trying to guess what iconic character from DC Comics will be revealed as gay. Most of the guesses from major media outlets seem to revolve around either Superman or Batman, even though those are the two characters there is virtually zero chance of it actually being. Batman has already been rather active with the women of the new DC Universe, shacking up with Catwoman on a rooftop and hooking up with Charlotte Rivers in his office. While Superman has been less active, his relationship with Lois Lane has been a central component of comics, TV shows, and movies, so there’s no way DC Comics would end that part of the Superman mythos.

With DC Comics most recent statement that he will be an iconic character, it narrows the choices down to the better known male characters. Because it’s also been indicated that it’s someone who is being re-introduced into the new DC Universe speculation has revolved about Beast Boy, Plastic Man, Elongated Man, Atom, Wally West, or one of the Earth 2 superheroes. While all those names could be possibilities, we earlier speculated that it could be Shazam. Here are some of the reasons that we think it’s Billy Batson that will be coming out.

5. In early 2012, well before the recent announcement at Kapow, Comicbook.com received a couple of tips that Shazam would be gay in the new DC Universe. The tips came from unconfirmed sources, but the suggestion was that the storyline would revolve around Billy Batson being a bullied gay teen. We started checking around on the story, and we noticed that it was actively being discussed on the DC Comics message boards. At the time, we wrote it off as just fan speculation. However, given the recent revelation by DC Comics about an existing iconic male character being revealed as gay, this rumor from several months ago seems to precise to just be a coincidence.

4. At Kapow, some reports seemed to suggest Dan Didio indicated that the character had not been introduced in the new 52 yet. A Shazam back-up story began in Justice League #7. However, as one of our readers pointed out, the back-up story to date has focused exclusively on Billy Batson and supporting characters. Shazam has not been officially introduced in the story yet. Perhaps, Didio considers the Shazam re-introduction to be still in process, so Shazam/Billy Batson would qualify as a character being re-introduced as gay.

3. Shazam’s sexuality has never been an important part of his storyline. Even though Shazam was portrayed as heterosexual in the old DC Universe and even dated Stargirl at one time, he was never attached to an iconic female character like many of the other major male DC characters. Superman has his Lois Lane, Batman has his Catwoman, Flash has his Iris West, and so on. However, with Shazam there isn’t a female character that is closely tied to him, so it would be easier to rewrite his sexuality without having it affect other supporting characters.

2. Shazam would be a new take on a gay comic book character. Gay characters themselves aren’t new in comic books. Even gay characters getting married isn’t new in comic books, as Archie Comics and now Marvel Comics have already introduced that storyline. Bullying of gay teens is a hot topic in the media, but no one has addressed it in a major way in a comic book story. Having Billy Batson come out as gay teen who has been bullied would allow for DC Comics to tell a meaningful story, rather than just say “hey look, we have a gay superhero too.”

1. The Shazam back-up story has subtle hints that a revelation is coming about Billy Batson. The new DC Universe Billy Batson is definitely being portrayed differently than the old universe Billy Batson. Billy’s been acting out like a brat, and he has trouble fitting in with the other kids in his foster family. Why is Billy such a troublemaker? Surely, there has to be more to the story than he’s just a jerk. After being lectured by his foster sister Mary, Billy says to himself, “Like she even knows me. Like anyone does.” When Billy sees the other kids i 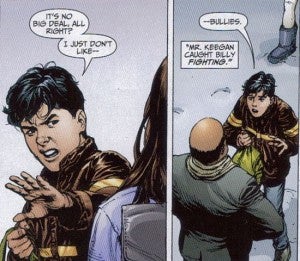 n his foster family being bullied, he rushes to their defense and reveals that he doesn’t like bullies. Now, all this doesn’t necessarily mean that Billy has been bullied in the past because he’s gay, but it’s certainly easy to see how the story could be going that way.

Five Reasons Shazam Could Be The Gay DC Comics Superhero