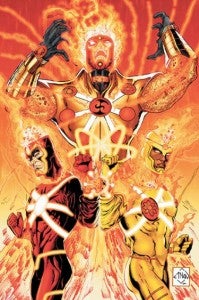 DC Comics has certainly generated some talk with their relaunch of the DC Universe. While they have taken a lot of heat over altering Superman’s costume, there are actually a lot of positives that are coming out of the move. Here are five things that we love about the DC Comics relaunch.

More Ethnic Diversity – Give DC Comics credit. They’ve been criticized about lack of diversity in their comics, and they are responding with perhaps the most diversity they’ve ever had in their line of comics. Mister Terrific, Static Shock, Firestorm and Batwing all feature black characters in the title role, and several of the team books now have more diverse memberships.

More Women – People always complain that there aren’t enough girls into comic books because there aren’t enough superheroines. Well, DC Comics appears to be doing their best to change that. Wonder Woman, Super Girl, Voodoo, Catwoman, Batgirl, and Batwoman all feature superheroines in the title role. And lets not forget, there is even an all-female team book in Birds of Prey.

Digital Comics – Let’s be honest, while we still love the smell of print and holding a paper comic book in our hands, there aren’t many new readers making it into comic book shops these days. If comic books want to reach a new audience, they are going to have to get behind the digital medium. By offering same day digital release, DC Comics is showing their commitment to the digital format.

More Darkness – Several of the new titles have a darker slant, which has us anxious to try them out. DC Comics isn’t hesitating on taking some gutsy risks with giving us some less traditional comics with a horror/supernatural angle. Justice League Dark, Demon Knights, Resurrection Man, Voodoo, Suicide Squad, Animal Man, Swamp Thing, Frankenstein, Agent of Shade, and I, Vampire all appear to be offering a look at the darker side of the DC Universe.

The Media Is Talking – Before the relaunch, the only buzz that DC Comics was getting revolved around Superman giving up his American citizenship, which was an unintentional uproar. It’s nice to see DC Comics intentionally launch a media event and have the press respond. While the jury might still be out on if the relaunch will attract new fans to comic books, it certainly has the mainstream media talking, which has to count for something.