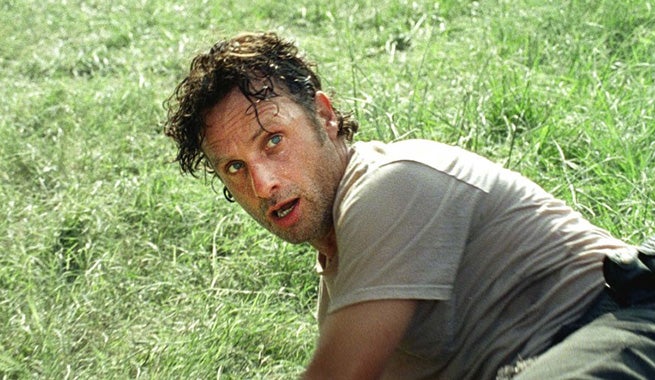 Last night's mid-season six finale was relatively tame as far as finale episodes of The Walking Dead are concerned. Perhaps the showrunners were busy replacing the action and cliff hangers with Easter Eggs and homages.

Let's take a look at some of the hidden little extras you may have missed in The Walking Dead's episode 608, Start to Finish.

One of those books is Invincible, and its titular hero and his companions were seen in one of the midseason finale's opening shots in the form of San Diego Comic Con exclusive minimates.

Remember that spine chilling story Carol told Sam about how he'll end up tied to a tree out in the woods, being ripped apart by zombies, and no one will be around to hear him scream?

Well, he does, too. And he's drawing about it in the opening sequence of Start to Finish and if the final scene is any indication, he's about to be torn to shreds if he doesn't shut his mouth.

It's no secret make up and effects guru Greg Nicotero enjoys paying homage to horror films which inspire him.

After the bell tower fell, the walkers were seen walking through a cloud of smoke, which Talking Dead revealed to be Nicotero's way of paying tribute to the 1980 film, The Fog. In The Fog, its monsters come from..well...the fog!

Another Nicotero homage came several times throughout the episode, when he featured impaled zombies, in reference to the iconic horror film, The Omen.

The 1976 movie is a horror classic. It was remade in 2006 but the 1976 film is the one which counts. Scott Wilson, who played Hershel Greene on The Walking Dead, will be playing a role in The Omen's follow-up series, Damian, next year.

Negan is the most infamous villain from The Walking Dead's comics and, recently, AMC announced the he'll be played by Jeffrey Dean Morgan.