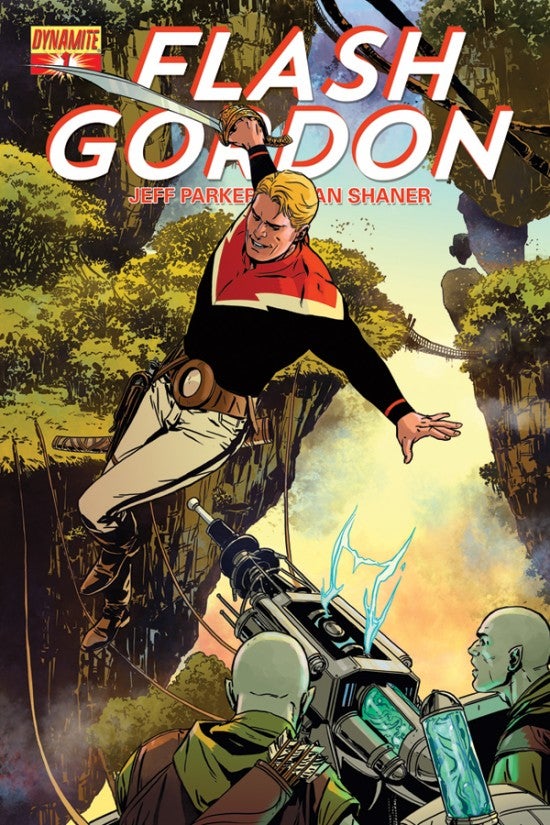 Perhaps it is partly the fault of my own high expectations, but I can’t help feeling just a bit let down by Dynamite's newly-released Flash Gordon #1. That isn’t to say that it’s bad, more so that it could have been better.

Going into this comic, I had high expectations. The creative team is absolutely top-notch with Batman ’66 scribe Jeff Parker on writing duties, Evan “Doc” Shaner whose work recently appeared in The Adventures of Superman handling art duties, and Jordie Bellaire of Pretty Deadly on board as the colorist. As for the subject matter, I may not be very familiar with Flash Gordon but he has a soft spot in my heart as a property that my grandfather always spoke very highly of from his own childhood.

How did it seem like this issue could have been better? Well, continue to read as I break it down. 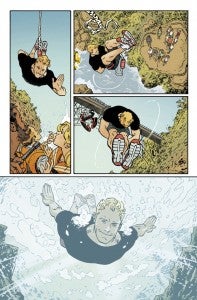 The art here is gorgeous. Doc Shaner has been a personal favorite artist of mine since I stumbled on his work a while back and he has done some excellent work in this book. One of the areas in which Doc excels is in capturing wonderfully and subtly emotive facial expressions, a talent that is very much in evidence here. From the heroic Flash to the wily Doctor Zarkov to the feisty Dale Arden, all are portrayed beautifully and the characters are brought across to the reader through their expressions as much as or even more so than through the writing. A favorite moment is when after landing on Arboria Flash gamely gambols through the trees for a while before looking back to see Zarkov and Arden just sitting on a branch refusing to join in the fun. There’s something about Flash’s deflated expression here that almost makes one imagine that a musical cue has just been hit signaling a change from a soaring orchestra score mirroring Flash’s highflying antics to some depressing trombones.

Aside from the character work, Doc also does a great job with creature design and execution. A giant lizard-like creature present on Mongo as well as eyeballed tentacles in an oceanic area, what appears to be an antlered Arborian hawk, and a giant caterpillar-like “tree vell” also hailing from Arboria only make me want to see more of Mongo’s fauna. The locations are also rendered well, with Earth, Mongo, Arboria, Frigia, and the aforementioned oceanic area all distinct and beautifully depicted. I’m also pleased to see the character design work. The Arborian people in particular hearken back to an Errol Flynn-esque depiction of Robin Hood and his Merry Men which is entirely appropriate given the time in which Flash Gordon was originally created by Alex Raymond and (based on the limited research I was able to do) appears to be in keeping with past depictions of this race/culture. Also appropriate and welcome is the depiction of Ming and his cohort in a way that appears to be recognizably Ming-like while both eschewing any hint of “Yellow Peril” and evoking a sense of Nazi-esque fascism.

Oh, and Doc has this little “spot the cameo” thing he sometimes does in his work. At minimum in this book, I’m pretty sure I spotted Neil deGrasse Tyson and Doc himself, but there might have been some I missed. This is a minor point but one that adds just a little bit of extra fun to the proceedings.

The coloring by Jordie Bellaire is gorgeous and complements the artwork perfectly. I don’t often feel the need to call out colorists in particular, but Bellaire’s work is just perfect with a depth of color and subtlety of shading that gives the book an even richer visual identity. It’s a shame that the preview images of this book online are not of higher quality as they totally undersell the beauty of this book and I think it’s the coloring that suffers most of all. The preview images lose the best qualities of Bellaire’s work in a way that does a distinct disservice to the book.

Unfortunately, the writing and plotting are what let this book down. However, that does not mean that there aren’t good things to say about them. The story starts “One Year Ago” and in a short space establishes the characters of Flash Gordon, Dale Arden, and Doctor Hans Zarkov, as well as provides clues to explain how we get to the jump ahead to present day. Once the reader is on the evil Ming the Merciless’ planet Mongo, we are treated to enjoyable dialogue and a rollicking chase. Ming’s merciless nature is also firmly and succinctly established. There are problems though…

This book presumably picks up where Jeff Parker’s Kings Watch miniseries left off. Kings Watch was a five-issue mini that teamed up Flash Gordon, the Phantom, and Mandrake the Magician, all characters originally published by King Features Syndicate as comic strips, to prevent the takeover of earth by an invading Ming the Merciless. Between knowing that Kings Watch precedes this issue and the one-year jump, I’m left wondering what I ought to know at this point and what I should rightly be putting together from hints, references, and context clues. Additionally, a reader entirely unfamiliar with the world of Flash Gordon would probably be pretty thoroughly confused about precisely what’s going on here.

I believe it was Stan Lee who once observed that, “Every comic is someone’s first,” and especially as a #1 issue it would be appropriate to expect that this would provide a solid entrance point for new readers into this universe. Here though, the reader is just thrust into the thick of things in medias res. I understand that this is a valid storytelling method/approach, but here the number and importance of the references, characters, and places thrown at the reader with little to no context boggles the mind. For instance, here is a list of things that either require background knowledge of Flash Gordon or appear to be unique to this version of the character that are referenced here with little to no introduction:

I don’t include our core cast of Flash, Dale, and Zarkov in this list because the “One Year Ago” segment honestly does a good job of introducing them as characters.

Following up on this question of knowledge of this universe, there is one particular moment that makes me scratch my head. All during this issue, Flash, Dale, and Zarkov appear to be blundering from place to place through portals with little to no knowledge of where they are or where they’re going beyond the hub of Ming-controlled Mongo. However, when they end up confronted by Prince Barin in Arboria, Dale somehow knows it’s called Arboria and references it as such without anyone having mentioned its name previously. So which is it? Do they know where they are or don’t they? This is a minor point but it further confused me about the timeline here and what events preceded this issue.

I get the feeling (or at least I sincerely hope) that there is going to be a flashback in the next issue laying out some of the backstory for this series or at least a conversation where the background and status quo of this universe are explained. Frankly though, I don’t think this series was well-served by starting in this manner and leaving that sort of material for the second issue. If the creative team wanted to start off with this sort of cold open, then this should have been a special giant- or double-sized first issue sort of situation so that more could have been established before asking the readership to gamble on a second purchase for the next issue where there may or may not be more new-reader-friendly explanation. First issues tend to sell pretty well anyway, so why not ask the readership to either pay more for a longer read or gamble on undercharging to try to hook more people?

Leaving aside that complaint, I do have a minor bone to pick with Doc Shaner’s art at one point. After crashing their plane on Arboria, there is one panel where Zarkov apparently unfastened his harness and started falling toward the ground so that Flash had to grab him. This panel suggests that they landed upside-down. My complaint is that every other panel suggests that they landed right-side up. Also, if they did land upside-down, I wonder how they got out of the plane safely and into the giant Arborian trees at all…

The Questionable: Where we talk about things that are neither good nor necessarily bad, but at least are a little head-scratching.

This is a minor point but I was a bit confused when Ming apparently used a ring to call down a column of red light to obliterate an underling who had displeased him. Is this something that the character in previous incarnations had been established as possessing the ability to do? Or is he a Red Lantern? Or perhaps did he get his hands on a Hammer of Dawn-style weapon from the Gears of War video game franchise? 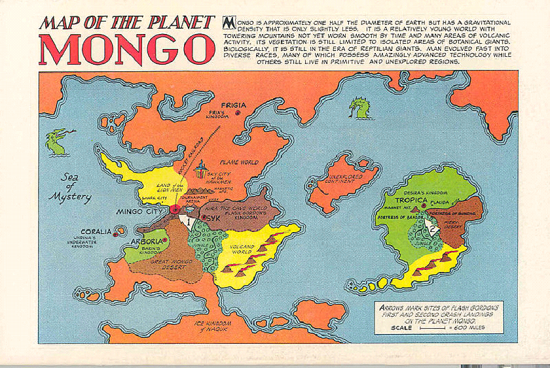 So, are Mongo, Frigia, Arboria, and the currently nameless ocean location all separate planets now? In classic Flash Gordon Mongo was one planet with a number of regions, all with vastly different climates and landscape. For instance, Frigia was a northern ice region and Aboria was a densely wooded area with large trees to the southwest of Ming’s base of operations. This comic seems to suggest that earth bears a similar relationship to Mongo (i.e., a separate world accessed via portal) as Frigia and Arboria themselves do. I don’t mind this kind of change if it is being made as I’m not exactly well-versed in classic Flash anyway but it would be nice to have some clarity.

Finally, why in the blue blazes is this book rated T+? What content in this book makes it anything other than appropriate for all ages? This is Flash Gordon for Pete’s sake! If any book ought to make for a good introduction for kids to the medium of comics it should be this one. If it’s because of the annoying Vampirella ads, can please excise those and give this book the rating it deserves? Seriously, I have never understood the appeal of that character beyond her physique and lack of clothing. Honestly, flipping through this comic only to find the exact middle of the book to be a two-page ad for that vacuous vampiric vixen only vexed this voluble viviparian.

Conclusion: While I wasn’t totally blown away by this issue, I did enjoy it. The art alone ensures that I’ll be picking up issue two and if more backstory is provided, then count me in for the long haul. I’d definitely recommend this book and suggest that you start boning up on your Flash Gordon lore. Please, Dynamite, just cool it with the ads featuring exposed female flesh…

Flash Gordon #1 Review: Maybe Not Quite a Miracle