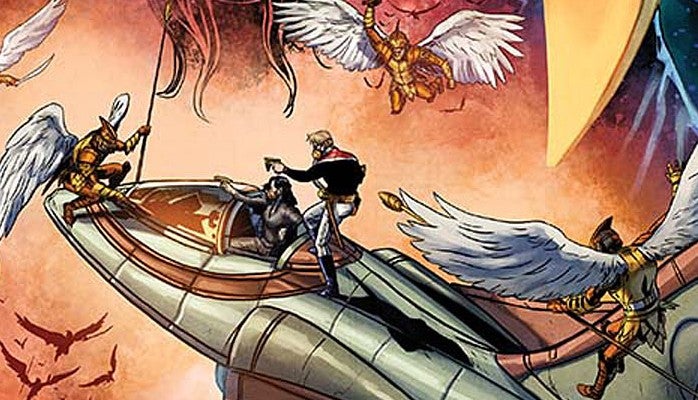 Another month, another excellent issue of writer Jeff Parker, artist Evan "Doc" Shaner, and colorist Jordie Bellaire's Flash Gordon. This issue is interesting though for employing a different art team for its first half, namely Sandy Jarrell on layouts and colors with Richard Case on finishes. Coincidentally, the copy that I picked up features the best cover to the series yet by artist Marc Laming.

All along, this book has been a joy to read. It combines comic-style action with clever writing, an engaging ongoing narrative, beautiful art, and a great deal of wholesome fun. While I can't say that the art team on the first part of this issue quite reaches the level of Shaner and Bellaire, they do a great many things right with touches that show they are trying to maintain some stylistic cohesiveness with the regular series artists. Taken altogether, this is another very successful issue in a series which I consider to be a must-read.

Really, I don't have too much to say before jumping right into the breakdown, so prepare your quantum drive and/or portal-generating crystal for SPOILERS… 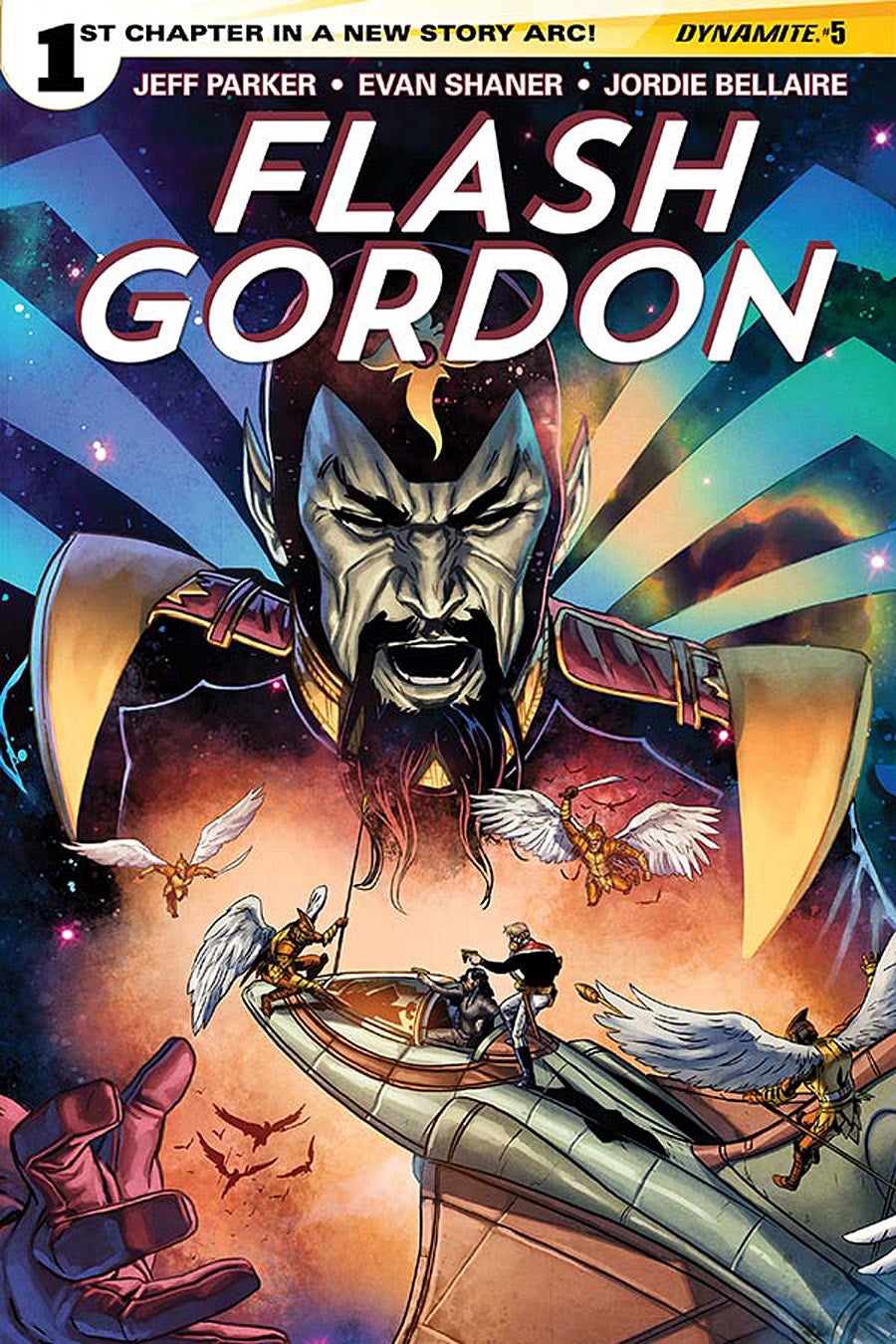 I compliment the art team of Jarrell and Case for their work on the first part of this issue. They do a great many things right, serving to provide engaging visuals that do not deviate too strongly from those which readers have come to expect from this series. On a basic level, they do a great job of capturing the likenesses of Dale, Zarkov, and Flash as well as the look of the Z-Plane and Ming's menacing mug. More specifically though, they incorporate Doc's hand-drawn panel borders and do a good job mimicking his panel layouts with insets and round panels.

More than simply treading water though, Jarrell and Case have some legitimately great moments in their own right. Following last issue, this comic finds the Flash team traveling through space from Arboria to Sky World. Along the way, they encounter a biomass floating in space which serves as a security system put in place by Ming the Merciless. Once grabbed by the mass, a plethora of Ming-faces begin to emerge from its brown muck resulting in quite an effective visual. Also, they provide a view of a spaceship with the desiccated remains of other travelers who were captured by the biomass wearing rather Silver-Age-y outfits and sporting intriguingly non-human dental work. Taken as a whole, I'd consider the art in the first part of this issue to be very successful.

Turning to the main art, what else can I say about Doc Shaner and Jordie Bellaire? Their artwork is always gorgeous and this is no exception. How can I keep this interesting though after praising them relentlessly for four issues…? I know! Limericks!

Now that Flash and his crew are on Sky World,
New and sprawling vistas to the reader are unfurled.
Jordie colors skies with panache,
And Shaner's work is quite posh,
As Zarkov's Z-Plane through the atmosphere twirled.

The panel layouts are still quite inventive,
And to keep reading they provide great incentive.
But much more than that,
Doc has expressions down pat,
As Zarkov and Flash to the Skyrens become quite attentive.

Along with wildly expressive faces,
One can't deny the artwork's other graces.
The angles and poses engage,
Anatomy flawless on each page,
And the Skyrens could have floated right off of Greek vases.

Jordie proves her worth time after time,
Elevating the look of Sky World's misty clime.
Her shading is subtle,
And her hues never muddle,
And the rainbow effects are so good it's a crime.

One can't forget the team's many small additions,
As when Doc in the clouds the title positions.
And in his usual habit,
He sticks wings on a rabbit,
And sticks the landing with his Hawkmen renditions.

Turning to the writing, this issue is a hoot. The detour in space with the biomass is a fun read and things only get better once Flash's team lands on Sky World. Emitting a song only audible to Flash and Zarkov, a group of "Skyrens" show up to take the men away leaving Dale to be captured by Hawkmen. I don't know if Jeff Parker is drawing from previously established Flash lore with the Skyrens but they are a fun addition to this book regardless. Parker has been doing an excellent job of making this series a consistently enjoyable read and this is certainly no exception. Seeing Flash and Zarkov behaving like besotted lunkheads is quite entertaining. In particular, Zarkov's overwrought statement to Dale of, "Release me, simpleton. I am ascending to the nadir of pleasure!" is at once nasty and hilarious.

Aside from the fun of this issue, Parker is off course further establishing the reign and control mechanisms of Ming as well as engaging in world-building. The existence of the biomass only adds to Ming's arsenal and impresses upon the reader his resourcefulness while Sky World is pretty firmly established in only a handful of pages. Honestly, I come away from this issue simply chomping at the bit wanting to see more of the story and this world in particular.

Once again with this series, there isn't a lot to say here. I could point out that the art team of Jarrell and Case generally don't provide the same level of detail in their artwork and shading as Doc Shaner and Jordie Bellaire, but they still do a good job within the style that they establish together.

Where did I leave that dead horse? Yup, the book is still rated T+ while the content is appropriate for and should be read by all ages. I still really wish that Dynamite would or could put an appropriate rating on this book. I have to believe that the need for a T+ comes from the advertising, this time featuring a plug for Evil Ernie showcasing a blue woman with a white face wearing what can only be described as some sort of fetish gear. That's not even mentioning the Vampirella: Feary Tales ad taking up the entire back cover. Honestly, it's getting to the point where I want to beat my head against a wall every time I see this sort of misguided advertising imagery in a title that is otherwise child as well as adult-friendly.

If you're not reading this title already, then what are you waiting for? It's great fun with excellent art and a compelling story. What more could you want from a comic? Kudos to Parker, Shaner, Bellaire, Jarrell, and Case on yet another sterling entry in an excellent series.