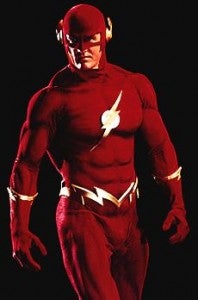 Despite reports that a Flash movie would be announced for 2016 at San Diego Comic-Con, there were no official announcements from Warner Bros. about a Flash movie at all. Now, Deadline is reporting that instead of the big screen (or maybe in addition to), the Flash is actually heading for the small screen.

The Flash is reportedly being fast tracked as a new show on the CW. The Arrow team of co-creators Greg Berlanti and Andrew Kreisberg and director David Nutter are said to be behind the project, which is expected to be officially announced today during CW's presentation at TCA. The idea is to introduce Flash during the second season of Arrow, before spinning him off into his own series.

In addition to Berlanti and Kreisberg, DC Entertainment’s Geoff Johns is also said to be one of the writers for the Flash series. David Nutter will be directing the pilot episode with Berlanti and Kreisberg running the series. If Flash does make it onto the CW's lineup, it will not be the first time that Flash has had his own television series. A live action Flash series ran on CBS back during the early nineties.

Flash TV Series In The Works For The CW