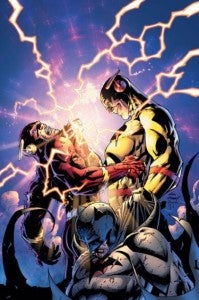 If you haven't finished reading Flashpoint #5, then be warned that this post contains some spoilers. While there have been many universe changing mini-series from DC Comics over the years, Flashpoint has to go down as one of the best. It's also one that no one will likely ever forget, because it results in the biggest change-up in DC Comics history. Flashpoint #5 features the final showdown between Flash and Professor Zoom. The two battle, while the world falls apart around them. Professor Zoom relishes in revealing that everything happening is actually Flash's fault for changing history to save his mother. After pretty much beating Flash senseless, Professor Zoom takes a moment to gloat, which leads to one of the most shocking, yet satisfying scenes of the Flashpoint series. The Thomas Wayne version of Batman puts the point of a sword right through Professor Zoom's heart, bringing a sudden end to the battle. However, Professor Zoom's death doesn't bring an end to the war taking place on earth between Aquaman and Wonder Woman. Batman is critically injured, and Superman shows up to try to break up the fighting. As things continue to deteriorate, Flash takes a note from a dying Batman and races off to find his mother. In a touching moment, Barry Allen reveals to his mother the price that the world has paid for him saving her. Barry's mom tells him that he has to let her go, and Flash races back through time to stop himself from saving her. By stopping himself in the past, Flash creates the new DC Universe. When Barry Allen awakens, he thinks everything is back to the way it was before, but he still remembers the years with his mom that now never happened. Flash pays a visit to Batman in the batcave, and he is relieved to find that Bruce Wayne is once again Batman. He delivers Bruce the note that had been given to him by Bruce's father Thomas Wayne. And in another shocking Flashpoint moment, Bruce Wayne is moved to tears. All in all, Flashpoint delivered an exciting and twisted alternate DC Universe. It helped lead into the relaunch in a convincing and interesting way. But most of all, Flashpoint #5 succeeded in wrapping everything up nicely, while delivering some powerful emotional elements. It was truly a mini-series worthy of launching a new universe.

Flashpoint #5 Review: A Great End To A Great Series