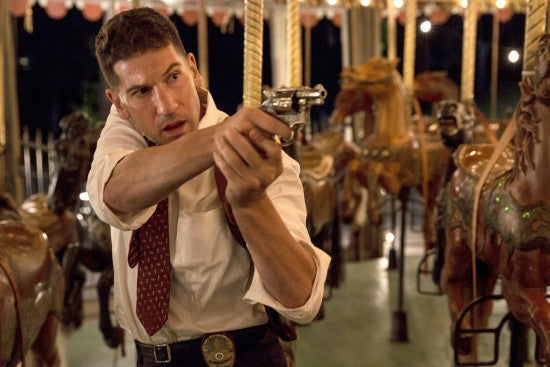 In a conference call with reporters in support of his new TNT series Mob City, filmmaker Frank Darabont said that he brought former The Walking Dead star Jon Bernthal to the project not just because of their long working relationship, but because he's known for years that if he ever had the opportunity to do a project like this it would be Bernthal he cast.

"When I first started working with Jon some years ago, the first time I worked with him I had the thought in my head, 'If I ever get to do a noir project I'm going to want him to play my noir hero; I'm going to want him to play my lead' because he's got that very period feel to me," Darabont said. "He doesn't come off as a contemporary guy, plus he's got this tremendously quiet masculinity; it's not forced, it's not showboat-y, but he's got a very testosterone-y kind of masculinity that's quiet and it's genuine and it feels like a throwback to Robert Mitchum and John Garfield, an earlier era of men who came up in tougher circumstances during the Great Depression and fought in those wars and just had to go through life as best they could withoug making a big deal of it. It's just such a throwback aspect--he so reminds me of those guys and those generations. For me, it was just a self-evident marriage of a certain kind of story I wanted to tell and this actor who would be so perfect to tell that story."

Mob City comes to TNT on December 4. Look for interviews with Darabont and members of the cast on ComicBook.com over the next few days.