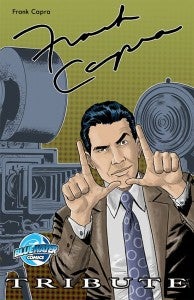 With Christmas right around the corner, Bluewater Productions has announced a Frank Capra tribute comic book. Frank Capra is probably best known as the director of It’s A Wonderful life, but that’s not his whole story.

Tribute: Frank Capra will tell the story of “Capra's life from penniless immigrant to Hollywood royalty, and examines his unique and invaluable contribution to America's war effort.” Tribute: Frank Capra is written by Matthew J Elliott with art by David T. Cabera.

“To me personally, Capra represents the holidays with his classic film, so this is a great book to share with your family to learn more about him while you are watching his films this season”, said publisher Darren G. Davis “I am obsessed with old movies and we wanted to tell Capra’s story in this medium.  It is one of the best ones we have produced”.

Tribute: Frank Capra may be purchased in print exclusively at Comics Flea Market and is available for download from iTunes, Amazon, Barnes and Noble, Kobo, ComiXology, DriveThru Comics, Wowio, iVerse, and more.