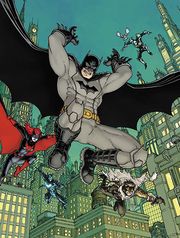 Scott Snyder, Peter Tomasi, Brad Meltzer, Frank Miller and Neal Adams are among the comics creators contributing the Detective Comics #27, January's issue of the series that will kick off the 75th anniversary of Batman in 2014. USA Today reports that the issue will be 96 pages when it hits the stands on January 8 and "showcases an all-star lineup including writers Paul Dini, Brad Meltzer, Gregg Hurwitz and Peter Tomasi and illustrators Neal Adams, Dustin Nguyen and Francesco Francavilla." The issue will feature variant covers by Adams, Jim Lee, Batman series artist Greg Capullo, Chris Burnham, Kelley Jones, Patrick Gleason and Mike Allred. "He's still that guy who if I could meet him, I have a whole paragraph in in my mind: 'This is why you matter so much to me …' Hopefully one day. His Batman stuff is just untouchable," Snyder said of Miller. Miller's Batman: Year One inspired much of what Snyder is doing in the currently-ongoing Batman: The Zero Year storyline and his The Dark Knight Returns reportedly inspired what Zack Snyder and David S. Goyer are doing with the Batman vs. Superman movie. The original Detective Comics #27, released in 1939, featured the first appearance of Batman. With The Death of the Family having recently fractured Batman's support network, it appears as though he's rebuilt a new one, including Batwoman, Batwing and Talon. It's likely those will be more "allies" than the "family" feel he had in the old days, with his adoptive kids and Jim Gordon's daughter by his side.