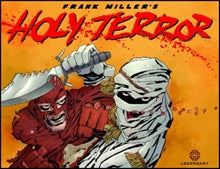 In the realm of projects long-developed and delayed, one has emerged from the abyss. Frank Miller's controversial graphic novel Holy Terror has found a publisher. Legendary Comics, a publishing division of Legendary Pictures, announced today that it would be publishing the 120 page work. Originally, the concept saw Batman battling the forces of terrorist group al-Qaeda, but it has now morphed to focus on a hero called The Fixer, a hard-edged hero who will be battling terror. The press release describes the project as, "a no-holds-barred action thriller told in Miller's trademark high-contrast, black-and-white visual style, which seizes the political zeitgeist by the throat and doesn't let go until the last page." In a move that could open up all sorts of discussion, the graphic novel will be released on September 14th, just days after the 10-year mark of the horrific events of 9/11.