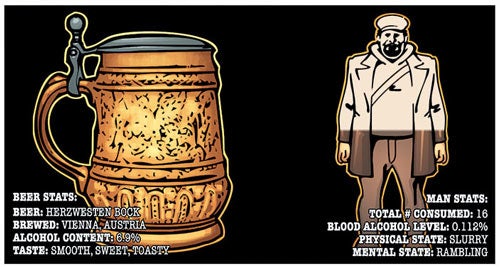 Whatever happened to Armstrong?

After Aram was abandoned in the Far Faraway by a scorned Obadiah Archer, he and his brother Ivar (the Timewalker) make their way back to Archer in the most circuitous and entertaining way you can imagine: a time-tossed pub crawl, allowing the immortal Armstrong to relive his past drinking glories (and sometimes watch himself at work with the ladies, with foes in combat and more).

That's the premise for this issue, which mostly doesn't feature Archer and which doesn't really deal with the issue of where Mary-Maria went at all just yet.

What it does do, though, is set up even more the escalating war between factions of The Sect, Valiant's illuminati-like villains who have secretly run the world for centuries. Among other things, we see that Toyo Harada, in reaction to the events of the previous issues, is setting himself up to profit from the chaos that the Sect War is likely to bring about, and to profit a second time by being key to whatever rebuilding needs to be done at the end of it.

We also get one of my favorite concepts so far in the series; to get personal for a moment, regular readers will remember The Gold Exchange and know that I'm a big fan of time-travel stories told well. A favorite, of course, is the Back to the Future trilogy, and Van Lente does an excellent job of evoking one of that series' most nonsensical scenes here in a way that feels like an obvious wink-and-a-nod but is also accomplished in a way that makes more logical sense and makes the scene somewhat believable.

Archer & Armstrong #15 was written by Fred Van Lente and drawn by Khari Evans. The issue was released yesterday, and is available on ComiXology by clicking here.

As always, Van Lente joined us to discuss the issue, some of the cool narrative devices he used and what it means for the future of the series. 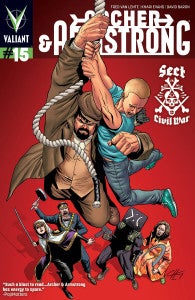 ComicBook.com: Harada has his fingers in a lot of pies these days, with this book coming out the same day as Unity. Being involved with the Sect AND Unity seems to give him an awful lot of power across the Valiant Universe, doesn't it?

Fred Van Lente: It does, and that's something Josh Dysart will be addressing in Harbinger rather soon.

ComicBook.com: I love the diagram for the pub crawl. Is that based on anything specific, or just a fun piece of visual business?

Van Lente: Thanks, no, it's just an idea I had.

ComicBook.com: "Bible-thumping Judas" is a nice phrase. Is it weird that I'm actually glad Armstrong is mad at Archer for a while here?

Van Lente: Not at all. I think it's a natural reaction. In many ways Archer is still a child, and his reactions are not proportionate to the offenses.

ComicBook.com: That time Gilad tried to settle down and have kids is something we're seeing some reflection of in the Eternal Warrior series, right? If so, that nod to the continuity was a nice touch. 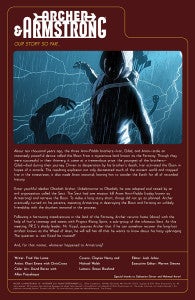 Van Lente: Right. Well, that book's written by one of my best friends, Greg Pak, so it's the least I can do...

ComicBook.com: You certainly get to indulge your passion for history and historical fiction in this book. Short of a creator-owned property, have you ever worked on another title where you got to tell such a wide variety of different kinds of stories?

Van Lente: Not off the top of my head. We did a lot of flashing in back in Incredible Hercules, of course, but that was to one specific period, ancient Greece.

ComicBook.com: Cutting straight from Mahmud attacking him to being drunk with him is a nice bit. It feels a little to me like Napoleon from Bill & Ted's Excellent Adventure.

Van Lente: Thanks. I don't really remember that movie very well, though.

ComicBook.com: Will we be seeing more of the Timewalker? Having not read much of the old Valiant stuff, I love the concept of the character.

Van Lente: Yeah, his series was my favorite of the old Valiant books, and I've read quite a few by now. Ivar will definitely continue to be an important part of the book, just like Eternal Warrior is. Come to think of it, Ivar's presence will continue to be felt even when he himself is not around.

ComicBook.com: I always wondered in Back to the Future Part II whether Western Union would ever actually hold onto a letter like this. I kind of like the way you set it up better.