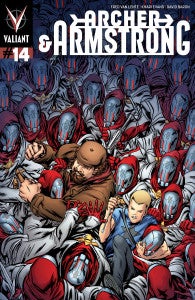 Why? Because we can! When Archer & Armstrong #14 came out earlier this week, it was an exciting issue--the first chapter of a new storyline always is--but it wasn't something I could leap right into, since we had a mountain of news coming in from New York Comic Con. Finally, I got a chance to sit down with the book last night and, knowing that Fred Van Lente was an incredibly busy man this week, didn't much expect for him to get right back to me.

He did, though, because the man's a machine.

It was an abbreviated commentary track, though, so here's an overview of what you need to know.

Besides, of course, the location of the digital copy, which comes with special bonus backmatter. That's here, and you should buy it before reading along this spoiler-filled commentary.

This month saw the origins of the sect--something that gave us a centuries-old look at a cynical pharaoh who believed that religion was to be used to keep the people in line--and then saw what happened when he espoused that philosophy in front of the wrong kinds of people. The religious leaders of the day came in to clean up the mess and, basically, the Illuminati was born there on the spot, an all-encompassing religious world order made up of a variety of different groups that, today, we would recognize as being from a variety of social and political backgrounds.

Black Bloc members walk hand-in-hand with the One Percent to keep the rest of the world cowed. 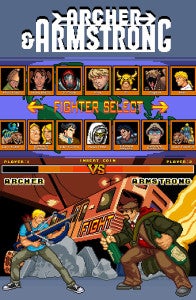 And now, thanks to some enemies of Archer and Armstrong, the various different orders of the Sect are headed down the road to war with one another. Meanwhile, there's a group that kidnapped Mary-Maria, there's another that wants Archer to do errands for them in exchange for the truth about his past and there's Armstrong--still stuck in Faraway with his brother the Timewalker.

And, of course, we've got Archer not really making the best decisions because, as Van Lente points out below, he's undergoing his rebellious teenage phase even though he's past his teenage years and wouldn't ordinarily be in danger of that if it weren't for his years of repression.

Series writer Fred Van Lente joined ComicBook.com to talk about #14, giving us some insight on the questions that bugged us most (even if this is a shorter commentary track than usual).

ComicBook.com: How much of this was planned out ahead of time? Did you have to clear Operation Rising Spirit being part of the sect with the Harbinger guys or was it just always that way?

ComicBook.com: The thing about choosing to believe in the god you can see with your own eyes, and how that becomes the sun--that was a George Carlin routine. Surely he isn't the first to note it, but it's worth mentioning that "You Are All Diseased" is worth a listen.

Van Lente: I'm a big Carlin fan. I saw him three times live when I was younger and I own most of his concerts on DVD. In some ways he's been more influential on me and my writing than any other writer or creative person.

ComicBook.com: You basically have tweaked a few names just a bit: the Master Builders instead of the Masons and the Sect as the Illuminati. Any reason they changed and some stayed the same? I mean, while the One Percent and the Black Bloc have the same names with the same cultural baggage as real-world groups, others are a little off.

Van Lente: Well, the Black Bloc is primarily known in Egypt, so I assumed it would be obscure to most English-speaking readers. And the One Percent is a colloquial term I applied to a specific group.

ComicBook.com: I do like the addition of the Black Bloc. Going after the far left now, as well?

Van Lente: Sure. They're a little more anarchist than, say, Occupy Wall Street, but here at Archer & Armstrong we are an equal opportunity offender.

ComicBook.com: What was the motivation behind giving Archer the grim 'n' gritty tone and the War Journal? was it just dealing with his angst over last issue or more than that? 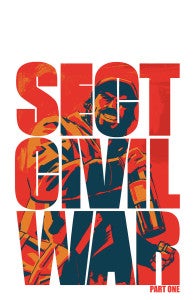 Van Lente: The story of Archer & Armstrong is in many ways the story of the growth of Archer as a person -- he was stunted from a cloistered upbringing and is just now entering his rebellious teenage phase. Characters need to grow and change over time in reaction to what happens, otherwise it's just a closed, static system.

Also, I thought it was really funny.

ComicBook.com: I love his "The Night" monologue.

Van Lente: Thanks! It's a favorite of mine and series editor Josh Johns as well.

ComicBook.com: Archer doesn't seem to do as well on his own as he would like to think, or is that just me?

ComicBook.com: How did Mary-Maria get back from the Faraway and find the One Percent?