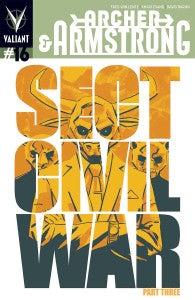 This week's issue of Archer & Armstrong brought everything to a head for the "Sect Civil War" story, as Archer puts a plan into play to leverage the various villain groups toward piece while the readers learned that a new figure has risen to the top of the Sisters of Perpetual Darkness who may not go along with his plan.

As always, Fred Van Lente joined us to talk about the issue, and provide some insight into the penultimate chapter of the story arc.

Spoilers ahead, of course; if you haven't read Archer & Armstrong #16 yet, then please buy one and read along with us! 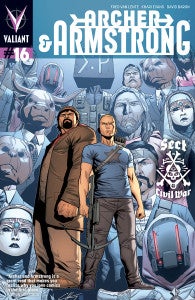 ComicBook.com: We get to see here how Aram became He Who Must Not Be Named. I never thought about it, but is the stigma attached to that name the reason he eventually becomes "Armstrong?"

Fred Van Lente: Possibly. The change between Aram/Armstrong doesn't make a whole lot of sense to me, it's just something I carried over from the original Barry Windsor-Smith series.

ComicBook.com: It almost feels like the "I don't want to hear that name ever again!" outburst becoming some kind of spiritual imperative is a kind of mutation of a lot of things you see in religions and other such organizations with long histories: somebody's personal preference becomes dogma, almost. Is that a valid reading?

Van Lente: Right, that's the idea. Originally that was going to be a major part of the series, revealing how various innocuous blunders of Armstrong over the years evolved into sacred writ through a theological game of "Telephone": "Don't eat pork!'" etc. But there just wasn't room, alas.

ComicBook.com: "But there just wasn't room, alas." - As in, there wasn't room before this reveal?

Van Lente: No, meaning I wanted to sprinkle those kind of bits in throughout the first few issues from the very beginning, but they were just kind of isolated comedy bits that didn't have a whole lot of pertinence to the modern-day story, so they got cut (as they should have been). 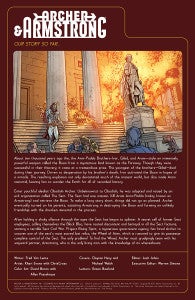 ComicBook.com: The bizarre history of Sagrada Familia is something that you just can't make up; it's not surprising it ended up here. Was there something particular about it that made you immediately see it and think, "Archer and Armstrong?"

Van Lente: I needed a place where the Sisters of Perpetual Darkness could hang out; I didn't want to go back to the Vatican. And I remembered the Sagrada Familia was featured prominently in an old Grant Morrison issue of Doom Patrol.

ComicBook.com: Is it really fair to blame Armstrong for what happened while he was time-traveling? I mean, theoretically it's Archer and Ivar who had more say over when he came out.

Van Lente: I don't think Archer is blaming Armstrong for anything, just expressing general disapproval of his lifestyle.

ComicBook.com:  That said, is it possible Ivar had a design, returning Armstrong at a time when this was all at a fever pitch rather than at an earlier time when they could have been more proactive?

Van Lente: Well, Ivar didn't dump anyone anywhere, the time arcs are in fixed locations. As Archer says, it's the closest timer arc he could find to where and when they needed to be. (And lets us do some convenient narrative hand waving without disrupting the flow of the story, of course.)

ComicBook.com: How do those Black Bloc heads work? I always figured the wearer of the head would be controlling the expressions on it, but when Bob dies, his face registers as much which seems an unlikely thing for him to do on purpose.

Van Lente: Unless that face is automatically triggered if the wearer dies? 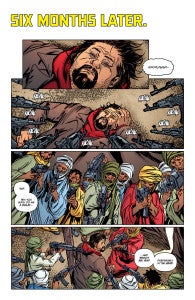 ComicBook.com: A weapon that absorbs pure belief certainly seems well suited to the Archers to manipulate, of all people, doesn't it? Or at least would make their brainwashing prowess somewhat sought-after.

Van Lente: I think it would be a useful weapon for pretty much anybody of a world-dominating bent, which is why it's so coveted by every faction of the Sect.

ComicBook.com: That statue head on the splash page has a very long, thin neck and large eyes. Is that a nod to the gray aliens from Far Faraway?

Van Lente: You mean on the bottom of the lake? No, I think those are meant to represent Akhenaten, the pharaoh who's buried in the pyramid. He was unique in Egyptian history for purposefully having himself depiced in a very ugly fashion, with big eyes, big eyes, etc. Though come to think of it the "Anceint Aliens" types believe ETs built the pyramids, so I'm sure they've used that as evidence at some point...

ComicBook.com: Will we eventually get a sense for just how Mary Maria managed to take over the Sisters? It's quite a jarring status change for her from the start to end of the issue.

Van Lente: It is, but an appropriate one, I think. She talks about it a bit next issue in the finale.

ComicBook.com: Re: that last page reveal, are we to assume that Obie is betraying Armstrong? My first thought as a comic book reader is that he's got an endgame that isn't immediately evident on the page but I don't know if that's a solid reading of the issue.

Van Lente: Time will tell if you're right...