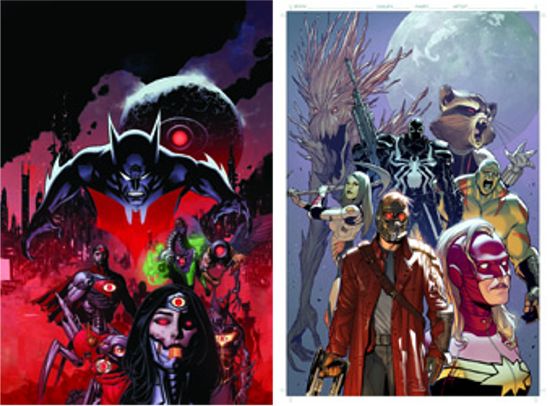 “Once again, comic book publishers are giving fans what they want: great stories with recognizable characters all inside a free comic book!” said Dan Manser, FCBD spokesperson. “This year’s Gold Sponsors are comprised of the top publishers in the comics industry we we’re sure that fans will be pleased with the line-up. We look forward to seeing all the fans during Free Comic Book Day at participating comic shops across the nation and worldwide.”

A complete listing of all sixty FCBD titles, including the twelve Gold and forty-eight Silver comic books, can be found in the January issue of Diamond Comic Distributors’ PREVIEWS catalog, on sale at all comic book shops January 1, 2014 . A separate announcement will be made next Thursday, December 19, about FCBD’s 2014 Silver Sponsors and their comic book titles.

ARCHIE COMIC DIGEST FCBD 2014 EDITION (W) George Gladir, Various (A) Fernando Ruiz, Various (CA) Dan Parent, Rich Koslowski, Rosario “Tito” Peña The world’s most famous teenagers for over seven decades are all here in this FREE digest! Packed with non-stop laughs and gaffs, we challenge you to find a FCBD offering with more pages than this! The perfect introduction to the world of Archie and his friends, this digest is filled with stories from some of the best creators in the business! Digest, 96pgs, FC    FREE!

DC COMICS—THE NEW 52: FUTURES END FCBD SPECIAL EDITION (W) BRIAN AZZARELLO, JEFF LEMIRE, KEITH GIFFEN, DAN JURGENS (A) Ethan Van Sciver (CA) Ryan Sook Jump on board DC Comics’ epic weekly series beginning with this all-new FCBD issue that features tomorrow’s Dark Knight, Batman Beyond (making his first appearance in The New 52), battling an army of cyborgs to avert an Apocalypse in the future which could destroy the DC Universe of the present! But that's not all; there are still more surprises to come. Stay tuned for more details! 32pgs, FC    FREE!

UNCLE SCROOGE: A MATTER OF SOME GRAVITY FCBD 2014 EDITION (W/A) Don Rosa In "A Matter of Some Gravity" by fan-favorite Don Rosa, saucy sorceress Magica De Spell turns Scrooge's life sideways — literally! — when she distorts the forces of gravity! Then, in "The Sign of the Triple Distelfink", Lucky Gladstone Gander faces a 24-hour luck jinx — and battles to hide it from a gloating Cousin Donald! Only ever published in the USA in under-printed mid-1990's editions, these Rosa classics are back like you've never seen them before! 32pgs, FC    FREE!

TRANSFORMERS VS. G.I. JOE FCBD 2014 EDITION (W) Tom Scioli, John Barber (A/CA) Tom Scioli Two titans of pop culture clash in the kick-off of an all-new, all-action ongoing series! When Earth is threatened by giant machine life from outer space, the planet's greatest heroes unite—but will they be enough? From the pulse-pounding pen of visionary artist Tom Scioli begins the most cosmic crossover of all time! 32pgs, FC    FREE!

RISE OF THE MAGI #0 (W/A/CA) Marc Silvestri Asa Stone, a young guardian at the gates of our reality, has seen a truth meant to be hidden and never seen. With his life a shattered ruin, he finds himself, keeper of a terrible secret and a list of seven names; Seven magicians, sorcerers, thieves, and killers who can be neither trusted nor believed and yet, stand as the only weapon mankind has against an unstoppable evil! Marc Silvestri (The Darkness, Cyber Force) presents a new fantasy-adventure series! 32pgs, FC    FREE!

MIGHTY MORPHIN POWER RANGERS FCBD 2014 EDITION (W/A) Various In 1993, the Mighty Morphin Power Rangers burst onto the scene in an explosion of colorful combat, bizarre monsters, incredible robot battles, and Megazord-sized fun, spawning a global phenomenon and an ever-expanding storytelling universe. These comics present the stories fans have waited over 20 years for: all-new tales featuring the Mighty Morphin Power Rangers! This is a never-before-seen story starring the six Power Rangers, and is not a reprint of any existing material! 32pgs, FC    FREE!