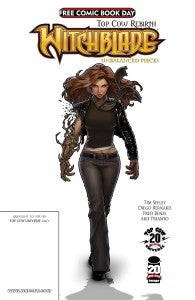 Top Cow's Free Comic Book Day offering this year is Witchblade: Missing Pieces, which picks up where the character left off at the end of Artifacts #12 and before her series was reconfigured under new writer Tim Seeley back in January. The release is well-timed, as Seeley's first arc of the title will be collected soon in a low-cost paperback later in the month. At $9.99, Witchblade #151-155 will be collected under the "introductory" price point that Image usually reserves for the first trade paperback of a new series, giving interested fans a cheap way to jump on and giving retailers a chance to compete with the disounted price of back issues on ComiXology with a print copy that's as cheap as digital. Tim Seeley spoke with us this afternoon about Witchblade, Free Comic Book Day, and the future of digital comics. As somebody who grew up reading Top Cow, does having such an important role in crafting the future of Witchblade and the Top Cow Universe make you feel a bit like that first generation of fans--Denny O'Neil and Marv Wolfman and the like--who got to really sink their teeth into the stories they loved as kids? Absolutely.No matter what I do, part of me is occasionally always going to stop and realize "Holy S--t. I'm writing WITCHBLADE." But, I think it's important to balance the affection and "fannishness" with making sure I approach each issues as a problem to solve.I have to think "How do I make this the most entertaining Witchbalde tale possible for the money the reader is paying." And do you think that perspective helps you to really look back and think about what made the character great when she debuted, worrying a little less about the baggage? Yeah, I think that my "feel" for the character comes from my earliest interactions with her. Those earliest impressions aren't weighed down by years of other stories or the politics of the comics industry. I think that really helps boil the book down into a base I can build from. That said, she's got her own baggage here in your run. She made a hard decision at the end of that first Artifacts arc that has left her feeling pretty empty. Right, and that emptiness, though she's not aware of what it stems from, is affecting her life. FOr the first time in a long time we're seeing Sara out of her element, and how she deals with that. You said you wanted her to team up with Dragon back when we talked in January. Did you notice that she was written into the most recent issue of Larsen's title? Ha, yeah, I saw that! I LOVE that stuff.I know Top Cow really wants to keep the actual Witchblade comic in it's own little world away from the more superheroey stuff associated with the other books...but, man, if I could get a Dragon cameo in here, I would squeal like the true fanboy I am. You've been in and around the business for a while. What do you think of Free Comic Book Day? I think it's great. I like that we're now at the point where it's an institution, with parents and families who go every year.I don't think it's the cure-all that I once thought it was, but it has definitely helped our industry in the long run. What do you think the roles of these books are? I mean, telling a story that's too continuity intensive will drive away fans but having something totally divorced of what's going on in your title will make it seem disposable to the readers you already have. Not to be blunt, but this isn't for the old-school fans who are just in it for their continuity porn from the Big Two. It's to help introduce new and lapsed readers to comics, in all their many forms. It's not about the trappings, it's about the medium. Every free comic should be completely accessible, and if there' a book only that only appeals to existing readers, it's a total failure. And, most importantly, stores that only use this to appeal to fans of superheroes are really missing the entire point. This is a chance to show people that our medium has content from a variety of genres. We have to be getting in the kids who just saw Avengers, and that kid's mom who might be into an urban fantasy or a slice of life, or whatever. With everything changing so quickly, do you think there's a future for Free Comic Book Day as a digital initiative, or is it best to keep it something special for the direct market? It's a good question. The truth is, a lot of people who shop for comics digitally are never going to go into a comic store. In fact, most people in this country aren't ever anywhere near a comic shop. If it's about the medium, I think we have to extend it to that digital readership, and grow that too.The direct market is too small right now to contain the audience we need, or that we could have. Digital has the means to grow interest in the medium to a greater, and much faster degree than physical shops.

Batman Beyond Funko Pop Exclusive With Chase Is On Sale Now