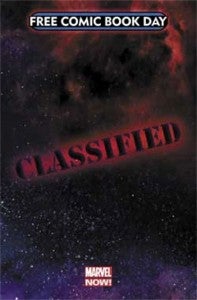 Celebrating its twelfth year, Free Comic Book Day will include such titles as Superman, Star Wars, The Walking Dead, Teenage Mutant Ninja Turtles, Sesame Street, Smurfs and a super-secret Marvel Comics title. Hey, we wonder if that super-secret Marvel Comics title will have anything to do with Iron Man, considering Iron Man 3 is being released the day before Free Comic Book Day.

“Once again, comic book publishers have given fans what they want—great characters, great stories—all in a free comic book!” said Free Comic Book Day spokesperson Leslie Bowser. “Retailers on the FCBD Committee had so many excellent titles to choose from that they expanded the Gold sponsor titles to twelve gold books for this year, instead of the usual ten. We’re sure fans will be pleased with the line-up and we look forward to hosting them again at local comic book shops across the nation and worldwide.”

Here's the tease for the super-secret Marvel title: Prepare for an epic that is out of this world as the biggest and best Super Heroes in the Marvel Universe come together for something that will leave fans demanding more! Marvel Comics has something special planned for Free Comic Book Day 2013… but for now it’s CLASSIFIED!

To check out all the Gold Sponsor comic book titles for Free Comic Book Day go to FreeComicBookDay.com.

The Flash: Best Look Yet at Barry Allen's Flash Ring

Did the Roman Reigns vs. Rey Mysterio Hell in a Cell Match Draw a Bigger Audience for WWE SmackDown?