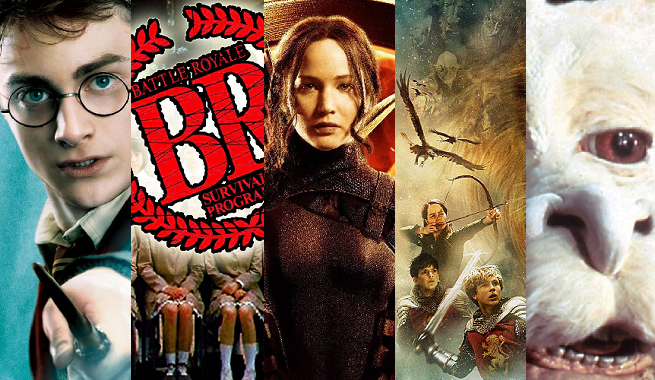 While superhero movies are the hottest commodity in Hollywood, movie studios are always on the lookout for the next young adult book series to turn into a blockbuster franchise. Last weekend, Maze Runner: Scorch Trials hit theatres, the second in a planned trilogy of movies based on the popular Maze Runner series of books. While young adult book adaptations can be a risky investment for studios (who remembers disasters like Eragon or A Series of Unfortunate Events or The Golden Compass) the allure of a franchise with a pre-existing fanbase that appeals to multiple demographics.

To commemorate the release of Maze Runner: Scorch Trials, here's five of our favorite movie franchises based on young adult books:

If you're looking for why Hollywood studios constantly churn out young adult book adaptations, look no further than the Harry Potter films. Warner Bros. purchased the rights to the first four Harry Potter books for a paltry $2 million and turned the popular book series into the second highest grossing movie franchise of all time (only the Marvel Cinematic Universe has outperformed the Harry Potter books which you can see here at the ComicBook.com Movie Database). The Harry Potter movies did so well in theatres in part because it faithfully recreated the world of the books, creating a breathtaking and immersive world. Per Harry Potter author JK Rowling's request, almost all of the actors in the film were British and the series retained its core cast (except for Richard Harris, who played Dumbledore but passed away after the second film) while producing eight movies over a ten year period. The Harry Potter franchise remains a major moneymaker for Warner Bros, as the studio collaborated with Universal Orlando to create a highly successful theme park based on the movie franchise. Warner Bros is also working on a movie trilogy set 70 years before the Harry Potter books starring Eddie Redmayne as Newt Scamander, a magical zoologist writing a book about magical creatures.

One of the greatest Japanese cult films of all time, Battle Royale is an ultra-violent adaptation of a Japanese young adult novel of the same name about a class of middle school students forced to kill each other in a government mandated game designed to quell youthful rebellion. While the Japanese government condemned the film's violent content, the movie was a financial success, earning over $90 million in box offices and receiving widespread acclaim. Despite the film's success in Japan, Battle Royale never had a widespread theatre release in America, as creators of the movies were fearful of legal reprisals. However, the film eventually made its way to American audiences thanks to a 2012 DVD/Blu-Ray release (Netflix users can also watch the film via Instant Streaming).

Based on a trilogy of young adult books by Suzanne Collins, The Hunger Games is set in a dystopian future where the government picks children from the general populace to fight to the death in a televised annual event. After volunteering to take her sister's place, the young archer Katniss Everdeen becomes a symbol for dissent and sparks a violent revolt against the tyrannical government. The Hunger Games faced criticism for its similarities to Battle Royale despite Collins' protests that she had never heard of the Japanese movie/novel until after she turned in a final draft to her publisher. Regardless of whether The Hunger Games cribbed Battle Royale or not, the movie franchise transformed Jennifer Lawrence into an international superstar and launched a trend in Hollywood towards producing more action movies starring female characters. The Hunger Games also caused a dramatic rise in archery lessons, as children across the globe discovered how handy a bow and arrow could be in government sanctioned deathmatches.

The Chronicles of Narnia

Disney and Walden Media began an ambitious movie adaptation of the C.S. Lewis's classic Chronicles of Narnia book series, starting with The Lion, the Witch, and the Wardrobe. Although various studios had tried developing the books for years, the success of the Harry Potter and Lord of the Rings movies convinced Disney that they could make a more faithful adaptation of the books. While The Lion, the Witch and the Wardrobe was a great success, a sequel based on Prince Caspian disappointed Disney, leading them to drop the franchise. Walden Media turned to 20th Century Fox to produce a third movie based on The Voyage of the Dawn Trader, which performed well internationally but not enough to convince the studio to move forward with a fourth series.

The Neverending Story is about a boy named Bastian who discovers a fantasy book (also named The Neverending Story) about the adventures of Atreyu, a young warrior trying to prevent his homeland of Fantasia from being consumed by "the Nothing", a vague sinister force representing cynicism and apathy. Bastian realizes that the book has magical properties and ultimately saves Fantasia by inventing a new name for the land's ruler, thus restoring Fantasia using the powers of his own imagination. After seeing how far the movie deviated from his original story (the second half of The Neverending Story featured Bastian entering Fantasia and nearly taking over the fantasy land after slowly losing his memories), The Neverending Story's author Michael Ende sued the movie's producers after they refused to change the film to make it closer to his intended vision. Ende lost the legal challenge, although a sequel to the movie would recycle much of the omitted plot. Recently, Warner Bros. looked into remaking The Neverending Story, but were dissuaded by a messy movie rights situation.