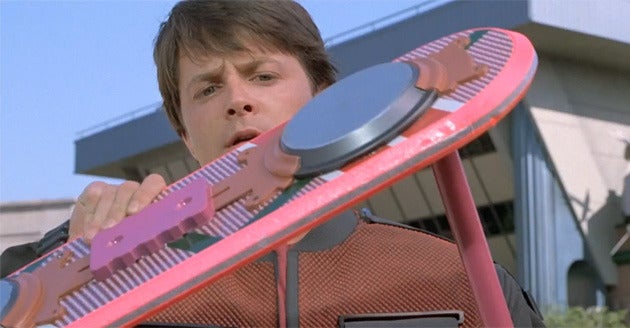 The future has finally arrived. 2015, which starts today, was the year Marty McFly visited in Back To The Future Part II. The film, which was released in 1989, made a slew of predictions for out the future would play out for humanity at large.

As screenwriter Bob Gale and director Robert Zemeckis peered 26 years into the future, what predictions about civilization did they get right, and which did they get wrong? It's a question that a group of futurists explored in a special report from Newsweek. In their lengthy discussion, the group of scientists looked at Back To The Future Part II's vision of the future and assessed its accuracy.

Possibly the coolest takeaway from the conversation was that, believe it or not, hover boards really do exist. They might not be like the sweet anti-gravity skateboards Marty rode in the film, but according to futurist Glen Hiemstra, there are magnetic repulsion boards called Hendo Hoverboards. Since they're magnetic, they only work on metal surfaces, but hey, it's a start.

Another interesting miscall that the futurists noticed was the future's over-reliance on fax machines. According to Hiemstra and fellow futurist Syd Mead, Back To The Future's 2015 hinged many of their communications on fax machines. In the late eighties, fax machines were all the rage, and apparently seemed futuristic to the film's creators then. Obviously, we've moved well beyond those devices, but it's an interesting observation on people's expectations back then.

Check out the rest of the futurist's detailed talk here, where they explore the alternate 2015's fashion, food, and more.