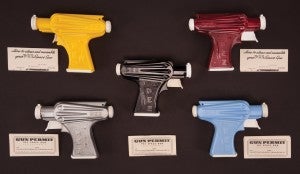 Profiles In History's July auction will be chock-full of items of interest to our readers, from animation and film memorabilia to a new announcement that one of the days will be set aside for a massive collection of vintage toys dating back to the beginning of the 20th Century, from Cracker Jack prizes to Hot Wheels to G.I. Joe and more.

PEZ dispensers will be a big draw at the show, as well, including not only the easily-identifiable bobble-headed dispensers familiar to anyone who's ever visited a grocery store but also PEZ guns (seen at left), which apparently were popular at a time when parents were less fussy about their children putting a gun in their own mouths.

These items and many others will be part of the Dreier Collection, going under the gavel on July 28. You can read more in the way of details below: 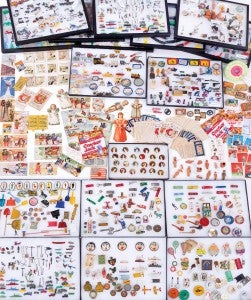 LOS ANGELES, June 18, 2012 - Profiles in History, run by Joe Maddalena, couldn't be more excited to take buyers back to their childhood with a collection of rare PEZ candy dispensers, the largest collection of Cracker Jack box toys ever amassed, G.I. Joes and Hot Wheels. These pop culture artifacts are a part of the esteemed Dreier Collection, a collection so large it will take years to auction off. Profiles in History's July auction will take place over four days in Calabasas beginning Thursday, July 26 through Sunday, July 29. July 26-27 will be Treasures from the Hollywood Vaults, July 28 will feature items from the Dreier Collection, including those announced below, and July 29 will be the Animation Auction.

For those that don't know, PEZ is a brick candy and mechanical pocket dispenser that has delighted kids, candy lovers and toy collectors for generations. The name PEZ was derived from the letters at the beginning, middle and end of the German word “Pfefferminz” (peppermint), which was the very first PEZ flavor. PEZ dispensers have become part of popular culture in many countries due to the large number of dispenser designs, with dispenser heads ranging from superheroes to monsters to sports themes to Disney characters and beyond. Today, PEZ dispensers are collected by passionate enthusiasts internationally. The Dreier Family has assembled one of the most extensive collections of rare vintage PEZ dispensers, displays and candies in the world. All of the items are rare, but some are one of only a handful in circulation - or even the only known examples in existence! Here are just some of the rare PEZ dispensers in the collection: a set of five 1950s Space Gun PEZ dispensers, (pictured above) $2,000 – $3,000; Disney "Soft Head" prototype PEZ dispensers, which were never sold to the public and only a few exist, including a Pluto, Captain Hook, Mickey Mouse, Goofy, Donald Duck and Dumbo, each estimated to fetch $2,000-$3,000; a 1940s trademark box PEZ dispenser in all red, with the PEZ “words box” and trademark on the side of the body; a first generation of PEZ dispenser, $3,000 – $5,000; and a 1940s “Folding Regular” rare prototype that was never commercially produced, $3,000 – $5,000. The "Folding Regular" is composed of a white plastic casing surrounding a clear plastic magazine where the PEZ candy would be loaded. “PEZ” is handwritten on the side of the dispenser. The last known example of such a prototype sold for $4,500 in 2002. The auction will also feature a rare PEZ display stand with football display box. This incredible 19 in. x 8 in. x 8 in. turntable store display with 18 very rare football PEZ dispensers, all in boxes. Each helmet-headed dispenser comes with two refill PEZ candy packs and an instruction sheet featuring pennants that can be personalized, cut out and glued to the space on the body of the dispenser. This entire ensemble comes in its original mailing box and is expected to fetch $4,000 – $6,000.

When German immigrant Frederick “Fritz” William Rueckheim and his brother Louis concocted an early version of their popcorn, molasses and peanut confection at the 1893 Chicago World’s Fair, they called it simply, “Candied Popcorn and Peanuts.” But in 1896 Fritz devised a way to keep the popcorn kernels separated by adding a small quantity of oil to each spinning vat. Prior to this innovation, the product stuck together in chunks. In 1896, the first batch of “Cracker Jack” was made. An enthusiastic customer is said to have coined its household name by exclaiming, “That’s crackerjack!” Later, the song, “Take Me Out to the Ball Game” gave Cracker Jack priceless publicity for free when the line, “buy me some peanuts and Cracker Jack!” was first sung in 1908. In 1912 mystery novelty items or “prizes” were included in every box of Cracker Jack. Among the very first prizes were baseball cards. Over time, prizes have included everything from charms to whistles; from tin toys to temporary tattoos. The original tagline for Cracker Jack was, “Candy coated popcorn, peanuts and a prize.” The prizes attained pop-cultural fusion with the term, “came in a Cracker Jack box,” referring to an object of limited value. To this day, Cracker Jack mystery prizes are as popular as the product itself. In this special collection, you’ll find some of the earliest, rarest and most sought after examples of Cracker Jack memorabilia in existence. It spans a century and is the most extensive single private collection ever assembled for offer to the public. Profiles in History strongly encourages interested parties to come view this massive collection in person at their offices. Just some of what is included: a set of 1898 Paper Dolls, over 80+ pre-1910 Riddle Cards, 17 Victorian Women pin backs, Cracker Jack Bears postcards sets, 11 riddle books, baseball score counters, baseball spinner, water guns, various cast metal battleships, metal train cars, movie slide cards, metal baseball score counters, standing tin soldiers, spinning tops, storybooks, pot metal and celluloid lamps and trinkets, tin dollhouse serving trays, movie flip books, tin-litho horse and carriage, button mirrors, painted wooden boats, wood buildings, tin-litho parrot, and many more. It is quite possibly the last time this number and variety of Cracker Jack memorabilia will ever be sold at one time. The collection is pictured above and expected to fetch $40,000 – $60,000. 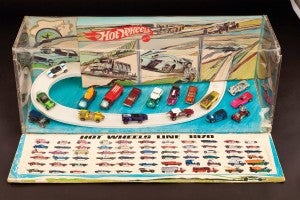 Hot Wheels were first introduced in 1967 and around 10,000 different models of Hot Wheel cars have been produced over the years. These highly accurate and detailed miniature vehicles are authorized by actual car companies including General Motors, Ford, Chrysler Motors--and international carmakers like Ferrari, Mazda, and Toyota--to make scale models of their cars. The Hot Wheels product line has also included various tracks, accessories and other types of vehicles. The Dreier Collection of Hot Wheels racers brings together some extremely rare and desirable pieces of American toy-making history and car culture. Among the items to be sold is a 1970 Hot Wheels 9 in. x 10 in. x 28 in. store display with over a dozen cars. Its graphic cardboard backdrop depicts vehicles in action in mod 70s illustrative style. A plastic dome encapsulates the sporty diorama, which features 17 of Hot Wheels’ finest metal toy cars locked down on a blue cardboard base. A few of the cars are mounted on a track while the others are parked. The famous orange Hot Wheels logo is emblazoned across the back of the fun and nostalgic period display. It is pictured above and expected to fetch $2,000 – $3,000. Another lot includes a collection of four 1973 Mattel Hot Wheels “Enamels” series cars: a Yellow Ferrari 312P, a Yellow Double Vision, a Blue Racer and a Yellow Odd Job. All cars are in their unopened store blister packs. This set is in excellent condition and expected to fetch $1,200 – $1,500. In addition, there is a set of four Mattel Hot Wheels “Red Lines” series cars, that includes a Green Short Order, a Blue Racer with stickers, a Gold Open Fire and a Blue Custom Charger. All cars are in mint condition in their unopened blister packs, this set is estimated at $1,200 – $1,500.