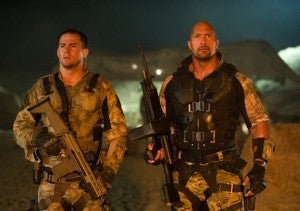 Dwayne "The Rock" Johnson has tweeted a confirmation that G.I. Joe: Retaliation is heading back for reshoots, adding scenes that will better accommodate the 3D. He confesses that he was looking forward to the release of the film in June and that he "hope[s] the 3D is worth the wait."

In the wake of the date change, some fans had speculated that the movie might be disappointing people in early screenings and that might have led to the delay. While reshoots to accommodate 3D certainly make sense, extra time on the set might also be used to tighten up problems with the film.

The star, who plays Roadblock in the film, describes the move as  a larger commitment to making the film "a massive world event," something that was probably unlikely to happen in the middle of an already-crowded summer movie season. G.I. Joe: Retaliation would have launched just a week before The Amazing Spider-Man if not for a last-minute delay by the studio. Given the sheer volume of major films coming out this summer, it seems unlikely that, following The Avengers, any film will remain at the top of the box office for more than a week or two until The Dark Knight Rises hits in late July.

Paramount Pictures announced yesterday that they had come to an agreement with their investors and decided to push G.I. Joe: Retaliation back nine months to add 3D and hopefully take advantage of the burgeoning foreign market for 3D films. Within hours, Universal Pictures had moved up the planned July release of Ted, a new comedy from Family Guy director Seth MacFarlane, to fill the gap in the summer blockbuster schedule left by G.I. Joe's retreat.