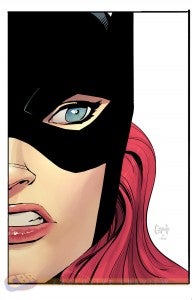 Gail Simone, whose exclusivity deal with DC Entertainment reportedly expired this weekend, has denied reports that she has informed DC of her intention to leave her best-selling Batgirl title. The rumors have been circulating for the last few days, with Bleeding Cool reporting that she was among a number of DC writers set to leave their current books in the next four to six months. Simone particularly stood out--not only because her name was in the article's headline, but because she had mentioned to fans on Tumblr that her contract with DC was up yesterday. She's also been discussing meeting with editors and artists, the timing of all of which seemed to paint a picture. Her decision to share that she was, until a last-minute editorial swerve, meant to be taking over DC's Deathstroke recently, also fueled speculation that her relationship with the publisher may be strained. This morning, though, a fan asked her about the rumors and Simone was direct, if not unequivocal. "I have not left Batgirl," she told the fan simply. Obviously, saying that she has not yet left a title for which she, even by the original rumor, likely had at least one more issue solicited it certainly not all-encompassing. This is true particularly since she didn't take the opportunity to directly address the rumor itself but instead worded her denial pretty carefully. Still, even if you want to speculate about the future, Simone's statement taken at face value means that as of now, she hasn't left the title.