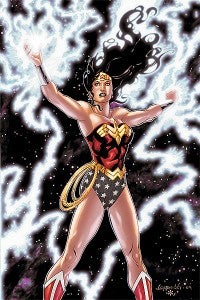 The Amazon champion must bid goodbye to another of her sisters, this time, one that is essential to her adventures and travels. DC Comics announced today, through their blog The Source, that long-time Wonder Woman writer Gail Simone, known for her current work on Secret Six and her historic run on Birds of Prey, will be giving up her writing duties on the book starting this summer. Issue #42 of the series will mark the beginning of Simone's final story arc on the book. DC has currently not revealed the next writer for the series, but in an open letter to Comic Book Resources, Simone said, "I have to say in complete honestly, I am genuinely thrilled by who is taking over the book. It's someone who is going to rock this book like there's no tomorrow, and I could not be happier with this choice." Simone's work with the character will continue at least through June, as she is supposed to be part of the big renumbering of the Wonder Woman series to issue 600, the renumbering due in large part to fan demand for the series to reflect Wonder Woman's place in the DCU, and Simone's run on the series has certainly been historic as well. Simone's work doesn't slow down. She will continue her work on Secret Six, and will also be a key part of the relaunch of Birds of Prey, the book she helped establish as a DC staple. Read the rest of Simone's letter in the link above!