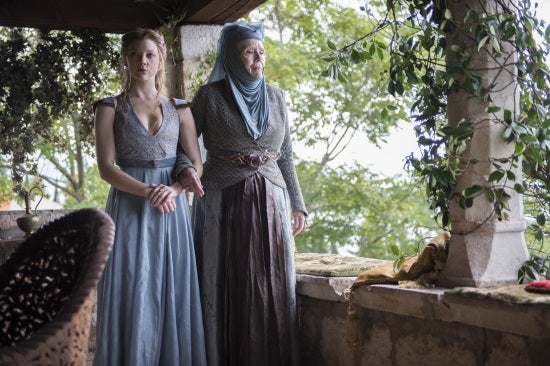 In a special features clip from the Game of Thrones Season 3 Blu-ray, actress Diana Rigg, who first claimed fame as Emma Peel in the classic Avengers television series, discusses her Emmy-nominated role as Olenna Martell, “The Queen of Throrns,” in Game of Thrones.

"She's very forceful," says Rigg. "She doesn't mince her words. She's witty, which is always fun to play... She doesn't to think too highly of them, men in general. She thinks the world would be better if it were run by women."

Olenna Martell is the matriarch of House Martell. She’s known for her barbed-tongue and, as Margaery Tyrell is betrothed to King Joffrey, spends much of the season using that tongue on Tywin Lannister, the patriarch of House Lannister.

"I think the audience will see her as the kind of female equivalent of Tywin," says Charles Dance, the actor who plays Tywin.

Game of Thrones Season 3 arrives on Blu-ray and DVD February 18.

Game of Thrones Blu-ray: Diana Rigg Talks About Playing The Queen Of Thorns