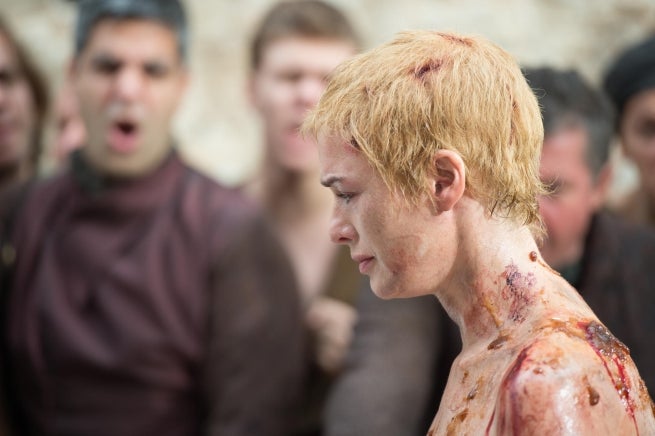 When Queen-Mother Cersei Lannister took her walk of atonement during the Season 5 finale of Game of Thrones, it wasn’t star Lena Headey who walked naked through the streets of King’s Landing (the real world’s Dubrovnik) for the three day shot. That was actress Rebecca Van Cleave, who worked closely with Headey to get the challenging scene right.

“It was one of the scariest, most wonderful, most gratifying experiences I could have imagined,” Van Cleave tells EW. “I never in a million years would have thought I would be in Dubrovnik surrounded by hundreds of extras and crew members throwing food at me, but it was amazing.”

Van Cleave was one of over 1000 actresses who applied to be Headey’s body double, and was chosen from seven finalists who met with producers in Belfast. An American actress who has performed in theater and in minor roles, the walk of atonement was her first ever nude scene.

“It was actually the most comfortable casting I’ve ever had, considering,” Van Cleave says.

Headey has done nude scenes in the past, but says she opted out of the walk of atonement “for several reasons,” including wanting to be able to focus entirely on her emotional performance. However, Headey did help walk Van Cleave through every step of Cersei’s walk.

“Lena was so good about walking beside me and guiding me into what Cersei was thinking and the movements,” Van Cleave says. “We were playing tag team — ‘You’re it!’ — and trying to make light of the fact we’re all covered in everything and going through this together.”

Walking nude through a street lined with 500 extras hurling foods and liquids was a challenging but rewarding process for Van Cleave.

“Particularly moments when I got all kinds of stuff thrown at me, with the chamber pots [being dumped out],” Van Cleave says. “Then on the last day, there was a well of emotion when she’s finally getting to the end and I was getting to the end too—not in a bad way, it’s almost like being one with the character.”

Finally seeing the finished scene, with both her performance and Headey’s combined, was a unique experience for Van Cleave.

“It was very surreal and emotional, to be honest,” Van Cleave says. “I had a good little cry afterward. Lena and I put so much into that scene and to see it all come together was really special.”

She also had words for the critics claiming that Headey opting to use a body double for the scene was some kind of copout.

“I personally don’t agree with anybody who says having a body double detracts from the scene,” Van Cleave says. “Lena put her heart and soul into that scene. It should all be about the finished product, not about whose body was where and whose head was where.”

Game of Thrones will return for Season 6 on HBO in spring 2016.

Game Of Thrones: Lena Headey's Body Double Talks About The Walk Of Atonement