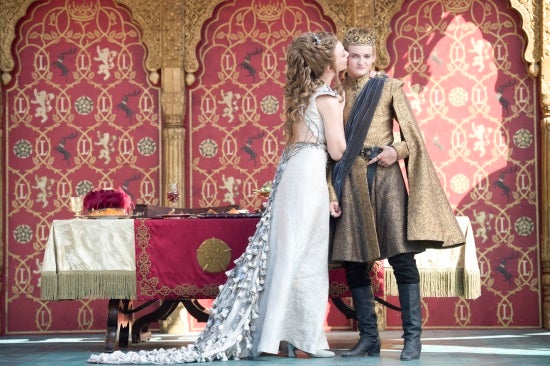 Before the wedding, Joffrey holds breakfast with his family and soon-to-be in-laws. He is presented with gifts and Uncle Tyrion gives him a book titled Lives of Four Kings in the hopes that Joffrey will learn some wisdom from it. Joffrey pretends to be grateful for the gift until he is given a Valyrian steel sword from Tywin Lannister. Joffrey immediately uses it to butcher the book (though they don’t mention it in the episode, in A Storm of Swords it is said to be one of only four copies still in existence). We should be used to such tantrums from Joffrey, but this one seemed particularly petty, even for him.

It had to happen eventually, for Shae’s own good, but you just never knew if Tyrion was going to work up the will. Shae’s life has been in danger ever since she came to King’s Landing with Tyrion, but with Tywin firmly in power and Cersei finally learning of Shae’s secret it was clear that action needed to be taken. Shae refused to leave, wanting to stand beside Tyrion, so Tyrion realized the only way to convince her was to reject her completely. Knowing that there isn’t much time left, Tyrion finally works up the will to send Shae away in a heartbreaking scene.

Oberyn Martell made his presence known when he ran into Tywin and Cersei Lannister at the royal wedding. They traded tense barbs with each other until Oberyn noted how, in some regions, the brutal rape and murder of a woman and her children was abhorred. He is, of course, reminding the Lannisters of the unpunished rape and murder of Oberyn’s sister, Elia Martell, by Lannister bannermen (most notable Gregor “The Mountain” Clegane) during the sack of King’s Landing that ended Robert’s Rebellion.

The Mock War of Five Kings

In, perhaps, Joffrey’s most tasteless act, he paraded out five dwarves dressed up as each of the kings in the War of Five Kings: Joffrey, Stannis, Renly, Robb Stark and Balon Greyjoy. Of course, this was particularly distasteful and upsetting for many wedding guests: Sansa Stark, still mourning the loss of her family, the Tyrells, who were fond of Renly, and Tyrion, who was generally offended by how dwarves are treated.

Weddings are becoming quite dangerous business in Westeros. First the murder and wholesale slaughter of Robb Stark, his mother and his bannermen. Now, the king himself is poisoned at his own wedding. We’re sure not many are mourning the loss of Joffrey Baratheon, but the look on his bloated, discolored face at the end of the “The Lion and the Rose” won’t be easy to forget.