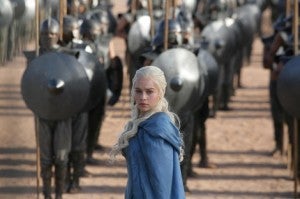 While it's already been widely reported that series creator George R. R. Martin will make a cameo appearance in the fourth season of HBOs' Game of Thrones, today, the pay-cable network made the show's renewal official.

That means a fourth season is actually coming, and not just speculative (which, of course, everyone pretty much assumed anyway, since it's the network's biggest moneymaker by a wide margin).

Sunday's season three premiere, which debuted opposite Talking Dead and replayed through the night, was seen by 6.7 million viewers, up 7% from the 6.3 million who watched the Season 2 debut last year. That, in turn, was way up (something like like 75%) over season one. As noted earlier, the second season also broke records for both DVD/Blu-ray and digital episode sales for HBO and shattered the mark set by the first season in those areas as well.

Game of Thrones Renewed For a Fourth Season