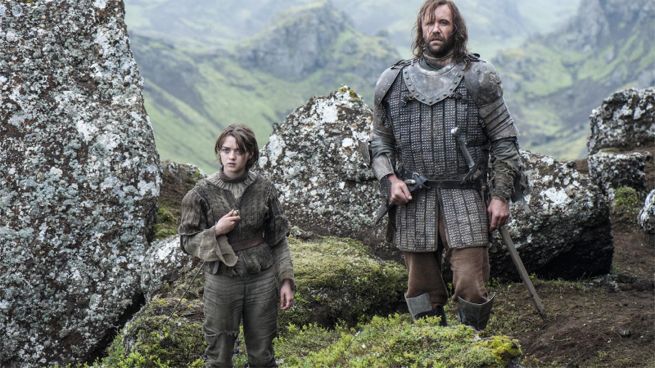 As the episode opens, Jon Snow walks out to the other side of the Wall, through the mess of bodies left by the battle the night before. He walks into the woods, straight into the Wildling camp and is captured. He is brought to the tent of Mance Rayder, who notes Jon’s black coat. Jon says he was sent to negotiate. Inside Mance’s tent, the two talk of Ygritte and Jon’s loyalty. Jon tells Mance that Ygritte is dead, and they drink to her. They then drink to Grenn and the giant he killed, Mag the Might who was their king. Mance says that he sent 400 men over the Wall. He says they need to hide behind the wall from the coming winter. Mance says if the Night’s Watch lets them through the gate, they won’t kill anyone else. Otherwise, everyone at Castle Black dies. Jon considers killing Mance, but just then an army of mounted knights attacks the camp, easily defeating the Wildlings. Mance orders his men to stand down. Stannis Baratheon and Davos Seaworth come out of the fog. Stannis expects Mance to kneel, but Mance says the Free Folk do not kneel. Davos asks what a Night Watch brother is doing in the camp, and Jon reveals who he is and who his father was. Stannis asks what Ned Stark would do with Mance, and Jon says to take him prisoner. He also recommends burning the dead.

In King’s landing, Pycelle and Qyburn are working on the Mountain, who is poisoned with manticore venom. Pycelle insists there is nothing to be done, but Qyburn says otherwise. Cersei insists Pycelle let Qyburn do his work. Qyburn says the process may “change” him somewhat.

Cersei is, again, trying to get out of her marriage to Loras. Tywin Lannister insists it go through. Cersei is determined to stay in King’s Landing to prevent Tywin and Margaery Tyrell from ripping Tommen apart. She threatens to reveal the truth about her and Jaime, but Tywin seems to actually not know. Cersei tells him its true, but he refuses to believe.

Jaime is looking through the Book of Brothers when Cersei comes in. She tells him what she told Tywin and that she chooses to love Jaime. The make love on the Kingsguard’s table.

Daenerys is holding court in Meereen. A former slave is being heard. The slave is now homeless without his former master. He says the mess halls are unsafe and he has no purpose without his master. He says he is just too old to thrive in her new world. She allows him to sign a yearlong contract of service with his former master, but no longer. Selmy warns that such deals will make men slaves in all but name.

Another man enters the hall, carrying something in his arms. He lays out the bones of his daughter, burned by Drogon. Drogon is still unaccounted for, but Dany has the other two dragons moved to the catacombs. Once there, she puts a chain around each of their necks.

At the Wall, Maester Aemon is holding a service for the fallen brothers of the Night’s Watch. The bodies are burned. Jon catches Melisandre’s gaze through the flames.

Jon goes to see Tormund, who was patched up by Aemon. He asks if Tormund want to say any words over the Wildling dead, but he says the dead can’t hear them. Tormund says he knows that Ygritte loved Jon, and that she deserves to be north of the Wall. Jon brings here there and builds her a pyre.

Further North, Bran and his party are still traveling. Jojen falls. Meera says they’re not going to make it, but Jojen says they’re already there. Bran sees, over the hill, the great weirwood tree from his vision. They walk towards it and something grabs Jojen’s leg from under the ice. They’re suddenly set upon by wights. They try to fight them off, but can’t match them. Bran takes control of Hodor to help. Hodor and Meera manage to fight most of them off, but one stabs Jojen multiple times. Just then, a great fireball is launched by a small person and destroys several wights. Realizing he’s lost, Meera kills Jojen mercifully. More wights attack. Bran and his group go inside the cave under the tree. The small person continues to hurl fireballs. The wights rush inside the cave, but fall apart. The small person says they cannot follow because the power that moves them is powerless in the cave. She reveals herself to be one of the Children. Under the tree, Bran finds an old man entwined in the tree’s roots. He reveals himself to be the Three-eyed Crow. He says Jojen knew he would die from the moment he left. Bran asks if he can make him walk again. The Crow says he will not walk, but he will fly.

Brienne wakes up and wakes Podrick. The horses are gone. Brienne is not happy. She looks around and comes upon Arya Stark. Arya asks about Brienne, if she’s a knight and what her sword’s name is. Brienne tells of how her father taught her to fight. The Hound comes out from behind a rock and Podrick recognizes him. Brienne realizes who Arya is. Brienne tells of her oath to bring Arya home and explains why she wasn’t with Catelyn when she died. The Hound assumes Brienne is here for the bounty. Brienne and the Hound both draw swords. Brienne tries to convince Arya to come with her to safety, but the Hound points out that there is no safety. The Hound says he’s the one to watch over her. They begin to fight. Brienne has the Hound at sword point. She says she doesn’t wish to kill him “sir,” but he says he’s not a knight and grabs her sword and forces her way up. They end up fist fighting. Brienne says the Hound over a cliff, but she’s lost sight of Arya.

Arya hides behind a rock and then goes to find the Hound. He’s in a bad way, with lots of open wounds. He knows he’s going to die. The Hound tells her to go after Brienne, that Brienne will help her, but she says no. The Hound asks her to kill him, to cross another name of her list, but Arya refuses. He tries to remind her of all the bad things he’s done, but Arya doesn’t flinch. He asks her to do it, but Arya just takes his gold and walks away.

At King’s Landing, Jaime opens Tyrion’s gate. He says Varys is helping him to get Tyrion out. Jaime leads him to a tunnel and they embrace. Tyrion goes on, opens a trapdoor and finds himself in the Tower of the Hand. He sees someone in the bed. She mumbles “Tywin” and “my lion” and Tyrion sees its Shae. They struggle until Tyrion gets his hands around the chain on her neck. He strangles the life out of her with it.

Tyrion takes a crossbow off of the wall. He goes and finds Tywin sitting in the privy. Tywin says they will go and talk, but Tywin keeps the crossbow on him. Tywin says he’s always wanted Tyrion dead, but he respects and admires that he refuses to die. Tyrion says he loved Shae and that he murdered her. Tywin calls her a whore. When he says the word again, Tyrion shoots him in the chest. Tyrion reloads and shoots him again. Tyrion goes to Varys, who is worried about what Tyrion has done. Varys smuggles Tyrion in a box onto a ship.

Arya rides to a dock. She finds a ship’s captain. She says she wants to go to the North, but the Captain says no. He says they’re not going to the North, but to Braavos. She hands him the iron coin that Jaqen gave to her and says the words “valar morghulis.” She is given passage on the ship immediately.

Game Of Thrones Season 4 Finale: The Children Recap With Spoilers