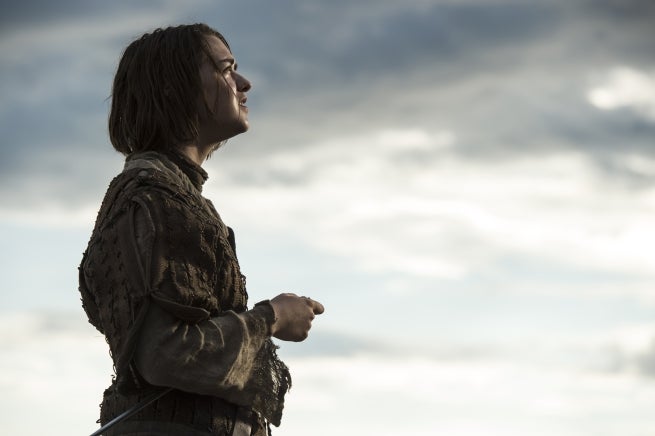 Arya stares at the Titan of Braavos from the deck of the ship she boarded, as the ship’s captain tells her stories of how the Titan would come alive and wade into the water to defend Braavos from attack.

Arya examines the city’s docks as she is rowed to shore. The captain takes her to the House of Black and White, and tells her it’s where she’ll find the man she seeks. She steps on to the shore where the building stands in front of her, with one black door and one white door. The captain leaves her there.

Arya knocks on the door. A man in a dirty, simple robe opens the door and stares are her. She greets him with valar morghulis, and shows him her coin, telling him she got it from Jaqen H’ghar. The man only says that nobody by that name is there and shuts the door.

Arya sits outside the House of Black and White until nightfall, reciting the names on her list. She remains there even as it starts to rain, and into the next day, saying the names and looking at the coin. She finally stands up and walks away, tossing the coin into the water.

Brienne and Pod stop at an inn for a meal. Sansa and Littlefinger are in the same place, eating as well. Sansa asks Petyr about the message he received before they left the Vale. Petyr tells Sansa that his marriage proposal has been accepted. Pod notices Littlefinger and Sansa and points them out to Brienne. Pod advises caution, but Brienne tells him to ready the horses. Brienne approaches Sansa and Littlefinger, but the guards step in her way. She introduces herself, but Littlefinger reminds her that they were introduced to each other by Renly Baratheon previously. Littlefinger invites Brienne to come forward, and Brienne swears her sword to Sansa. Littlefinger questions Brienne about what happened to Renly. She tells the story of Stannis’ shadow, but Littlefinger only points out how many times Brienne has failed. He asks why he, as Sansa’s uncle by marriage, should want such a failure protecting Sansa. Brienne asks for a word alone with Sansa, but Sansa refuses, noting that she saw Brienne kneel to Joffrey.

Brienne makes a break for the horses, cutting them free and taking off with Pod behind her. Petyr’s men chase them through a forest, and eventually Brienne and Pod become separated. Brienne gives the men following her the slip and doubles back to see Sansa, Petyr, and their entourage on the move.

Pod’s horse throws him from the saddle in a river, where he’s found by one of Petyr’s men. The knight charges at Pod, but Brienne arrives in time to intercept. A second knight attacks as well, but Brienne cuts him down. Brienne says they’ll follow Littlefinger and Sansa. Pod suggests that maybe she is released from her vow after being refused by both Stark sisters, but Brienne doesn’t believe that Sansa is safe.

Jaime comes to see Cersei. He opens a container that contains a snake statue with a necklace in its mouth. Cersei says only two such necklaces exist: her own, and the one she gave to her daughter, Myrcella. They take it as a threat. Cersei blames Jaime’s caution about their children’s true parentage for everything that has befallen them. Jamie says he’s going to go to Dorne to find Myrcella.

Bronn, dressed in clothing befitting his new station, is skipping rocks along the coast while his bride-to-be discusses their upcoming wedding. Bronn examines the castle he thinks he’ll inherent, but Lollys explains that her sister will inherent Stokeworth. Bronn makes veiled threats towards Lollys’ sister before spotting Jaime Lannister. Bronn expresses condolences concerning Tywin’s death, and Lollys leaves them. Jaimie hands Bronn a scroll that says Lollys will be marrying someone else. Jaime says Bronn will be coming with him, and when they return he’ll give Bronn a much better girl and a much better castle.

Ellaria Sand watches Myrcella with the young Dornish prince from a balcony in Dorne. She goes to speak to Prince Doran and is at first blocked by Areo Hotah, until Doran tells him to let her pass. Ellaria reminds Doran that Oberyn was murdered, and Doran reminds her that death during trial by combat is not murder. He will not go to war, but Ellaria says the Sand Snakes are with her in seeking revenge. She resents that Doran is allowing Myrcella to enjoy their hospitality. She wants to mutilate and kill Myrcella, but Doran says they will not do such things while he rules. She questions how long that will be.

In Meereen, Daario tells Grey Worm that the Unsullied are too conspicuous to find the Sons of the Harpy. Daario suggest that his Second Sons blend in much better. The burst into a building only to find it empty. Grey Worm is ready to go, but Daario stabs into a false wall where a man is hiding. The dagger finds the man’s leg. In the wall, Grey Worm finds knives and a Sons of the Harpy mask.

In the Great Pyramid, Dany and her advisors discuss what to do with the Son of the Harpy they found. They argue back and forth but come to no conclusion. Dany dismisses them, but Selmy remains. He talks to her of the Mad King, telling her that the stories of his insanity and cruelty were not lies. He tells her that Aerys’ efforts to intimidate people into obedience only sparked a rebellion. She takes his meaning and agrees to not have the Son of the Harpy executed without a fair trial.

Tyrion and Varys are travelling in a luxurious but closed off wheelhouse. Varys tells Tyrion he can’t walk outside because of the bounty Cersei put on his head. They are currently heading to Volantis to get on the road to Meereen. Varys tells Tyrion that he was quite good at ruling during his time as the Hand of the King. Tyrion again says he wants to go for a walk, joking that Cersei couldn’t possibly kill all of the dwarfs in the world.

A dwarf’s head is put on a table in front of Cersei. She says it’s not Tyrion. She sends the men who brought it to her away and tells them to take the head, but Qyburn asks to keep it for his work.

Cersei and Qyburn join a meeting of the Small Council, which also includes Kevan Lannister, Mace Tyrell, and Grand Maester Pycelle. The queen, serving as advisor to her son until he comes of age, promotes Mace Tyrell to Master of Coin as well as Master of Ships. She promotes Qyburn to Master of Whispers, since Varys has abandoned the post. She offers Kevan the role of Master of War, but he argues with her, refusing to be her puppet. He says she is the Queen-Mother and nothing more, and leaves for Casterly Rock until the king summons him.

Shireen is trying to teach Gilly to read, while Sam looks up facts about Lord-Commanders of the Night’s Watch through history in his books. Shireen says she learned to read at the early age of 3, because her mother kept her inside to hide the greyscale. Gilly recounts stories of her two sisters who contracted greyscale, and were forced outside. They died covered in it and behaving like animals. Lady Selyse enters and Sam and Gilly leave. Selyse tells Shireen to stay away from Gilly because of the threat the Wildlings pose to Stannis.

Stannis scolds Jon for showing mercy to Mance Rayder, against the king’s orders. Stannis says if the people don’t fear him they won’t follow him. Jon says, with respect, that the Wildlings will never follow him, only one of their own. Stannis shows Jon a message from Lyanna Mormont, saying her house only serves the King in the North whose name is Stark. They talk about the upcoming election of a new Lord Commander, which Alliser Throne will most likely win. Stannis offers the North to Jon, saying he’ll grant Jon his father’s name to make him Jon Stark. If Jon kneels before Stannis, he can rule in Winterfell.

Jon tells Sam. Sam is happy for him, but Jon says he’s going to refuse. If he breaks his vow to the Night’s Watch, what kind of lord could he hope to be? Maester Aemon asks for candidates for Lord Commander, and Janos Slynt immediately stands for Alliser Thorne. Another stand for Denys Mallister. Aemon moves to begin voting. Sam interrupts him and elects Jon. Alliser stands and casts aspersions on Jon as a Wildling sympathizer for his love of Ygritte and the respect and mercy he showed to Mance Rayder. The Night’s Watch votes, and the votes are counted. There’s a tie between Jon and Thorne. Aegon himself casts the final, tie-breaking vote for Jon.

Arya uses Needle to kill a bird in the street. A man, with two others, sees her and asks her what she’s got. She tells them to turn around and go and pulls Needle on them. They are not intimidated and plan to rob her of her sword when the man from the House of Black and White shows up. She asks him why the others were scared of him. He tosses her back her coin and pulls off his face, revealing Jaqen H’Ghar beneath. She reminds him that he said there was no man named Jaqen H’ghar in the House, and Jaqen says there isn’t, because “a man is not Jaqen H’ghar.” She asks who he is, and he replies “no one, and that is what a girl must become.” He opens the door to the House, and Arya walks inside.

Mossador, who speaks for the freed slaves on Dany’s council, enters the cell of the Son of the Harpy with some other men. The Son tells him that Dany will never belong there.

The son is nailed to a wall with his mask on his head, and “kill the masters” written in blood on the wall beside him.

Mossador stands for judgement at Dany’s feet. Mossador tells the story of the rebellion he fought in for Dany, of killing his father’s master. Dany says the Son’s life was not Mossador’s to take, and that the law is the law. She orders Mossador taken away.

Crowds gather in the street, including some of the masters, as Dany and her entourage stand in a pavilion. She delivers a speech about freedom and justice, and how one cannot exist without the other. Mossador is brought before her. Mossador asks for mercy, as does the crowd, but Dany sentences him to death. The crowd continues to beg for mercy until Daario cuts off Mossador’s head. The crowd falls silent, and then hisses. The former slaves throw rocks and a riot begins to stir. Dany is hurried to safety.

Once back in her chambers, Dany sends her council away. She hears something above, and walks upstairs. She walks out to the balcony and finds Drogon standing atop the pyramid. He moves towards her, and she reaches out to him, but he takes off again before she can touch him.

Game Of Thrones Season 5 Episode 2: The House Of Black And White Recap With Spoilers