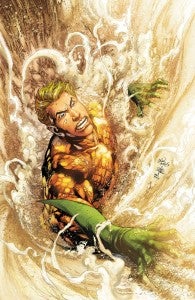 Rumors have Geoff Johns and Ivan Reis Leaving DC Entertainment's Aquaman, with January's #16 being the final issue for the pair, according to Super Podcasto Magnifico!'s Facebook page. "Looks like Geoff Johns will be jumping ship along [with] Ivan Reis after Aquaman #16," the podcast reported. "No word yet on who will be replacing them, but they've definitely got some big shoes to fill. Will you still read Aquaman without either of these guys on the title?" The A-list creative team, who worked together on Green Lantern for quite some time, are rumored to work together on Justice League after Jim Lee leaves that title. Losing the team is certainly a tough pill to swallow for Aquaman, a title that's struggled for years despite having a series of big-name creators attempting to rehab it (with varying degrees of success for guys like Erik Larsen, Dan Jurgens, Kurt Busiek and Peter David). Outside of comics, the character is still widely regarded as "the guy who talks to fish," and that's a reputation he's really only just now starting to shake in the comics community, thanks in no small part to Johns's writing. This isn't the first time Johns has taken a much-reviled character into best-seller territory and then left shortly afterwards; he did the same with Hawkman and Booster Gold, each of which had some success after he left but were cancelled before they reached fifty issues (although in the case of Booster Gold it was the New 52 relaunch that precipitated the cancellation). There's nothing official out of DC's blog or Geoff Johns's Twitter on this, so still consider it rumor--but it's a pretty plausible one.