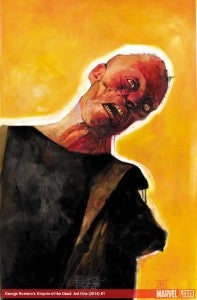 Today at New York Comic Con, Marvel Comics teased the idea that vampires might join George A. Romero's classic zombie universe when his new series, Empire of the Dead (set in the world of his classic Night of the Living Dead, Dawn of the Dead and Day of the Dead) comes to Marvel Comics later this year. "I grew up reading comics and I've always loved them," Romero said. "The good ones stretch the imagination. Writing a comic book does the same thing for me. It encourages me to explore new ideas and characters that I might not have tried otherwise. I can turn off the part of my brain that's always worrying about how to do things, like how I'm going to shoot a particular scene or how much it's going to cost. Of course, that time may come, if we adapt Empire of the Dead for other media." Why New York? Well, it's in the DNA of Marvel Comics, of course--and even if the story isn't set in the Marvel Universe, it's in Romero's, too. "I grew up in New York, so it's in my blood," he explains. "I've never consciously avoided setting a film here. It just seemed appropriate do it now, for Empire of the Dead, which wouldn't be called [that] unless it was set in the Empire State. I wanted a setting readers would recognize so that I could portray a familiar place in an unfamiliar way." "They're either heroes, villains, or something in between, but they're all trying to survive," Romero said of the book's protagonists. "The heroes are looking for a solution to the problem. Is it possible for the living and the dead to live together in peace? The villains are gathering as much power and privilege for themselves as they can, and sticking it to everyone else. And the people in between are just trying to get by without being killed. In other words, it's pretty much like the world we live in today."