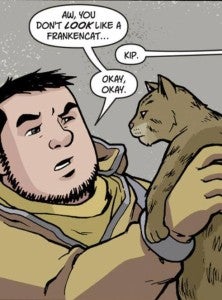 NBC is developing a TV drama based on the Oni Press comic book series Ghost Projekt by Joe Harris and Steve Rolston, Deadline reports. It's not entirely surprising given that in recent months, Harris has teased big things coming for the property, urging his fans to "like" the Ghost Projekt Facebook page, in spite of the fact that it's been quite a while since new Ghost Projekt comics came out. Earlier this week, ComicBook.com speculated that we would see new Ghost Projekt soon, although we thought maybe it would be a comic based on a cryptic hint Harris dropped on Facebook about a new project set to be announced. "There's a pretty BIG f—ing announcement coming re: another original series of mine," Harris teased, probably about the TV deal. "This week and I have linked up to rain sweet devastation down upon you all." The series pilot was reportedly written by John Glenn and feature writer/director André Øvredal and centers on an American UN weapons inspector and a Russian FSB agent who are forced to team up to chase a group of thieves before they end up spreading dangerous supernatural material stolen from an old abandoned Soviet weapons lab. Øvredal will direct the pilot and serve as co-executive producer. Last season, many of the same producers involved with this project developed a pilot based on Cullen Bunn's The Sixth Gun, also fron Oni, although the pilot was not picked up. Closed On Mondays' Noah Greenshner will serve as co-executive producer on Ghost Projekt, with Oni Press's Joe Nozemack & James Lucas Jones serving as producers. This isn't the first time Ghost Projekt has been optioned for TV; last time around it landed at Syfy, where it was expected to be a TV miniseries but never got off the ground.