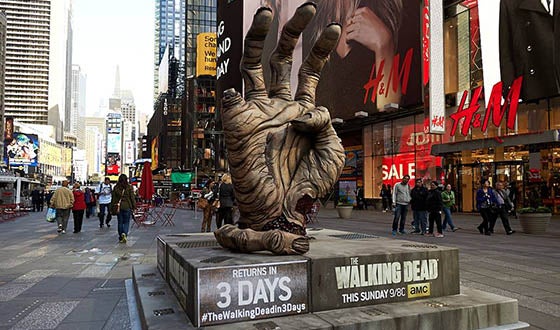 Times Square and Hollywood are infected with the zombie virus.

Well, sort of. The east coast's and west cost's most densely-packed areas are current hosts of massive, severed Walker hands. The hands serve as four-day countdown to the season five premiere of The Walking Dead. With each passing day, a finger will fall off of the hand until it only has a thumb and viewers are happily watching the series premiere.

The hand currently has two fingers-- the middle, and ring--remaining. Which one will be the last to go? Norman Reedus, a.k.a Daryl Dixon, offered his suggestion on Twitter.

For those attending New York Comic Con , The Times Square-based hand is only a mile away from the Jacob Javits Center.

The Walking Dead returns to AMC this Sunday at 9:00.