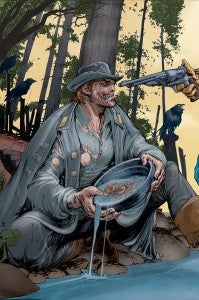 With the solicitation for All-Star Western #20, speculation that the character on the second half of the series' gatefold cover to #19 might be Booster Gold seems to be gaining some ground.

Last month's solicitation text for All-Star Western #19 set off some alarms with DC Comics fans, who can be seen speculating about it weeks ago on the solicitation pages at DC's website. The "WTF Certified" cover, which features a figure with yellowish gloves and blue pants holding a revolver to the head of famed outlaw Jonah Hex, offers the cryptic teaser "What type of gold means certain death for Jonah Hex?"

Hex, in the cover, appears to be panning for gold in a riverbed, as soon as the first commenter said "Booster Gold," it resolved into an interesting picture. 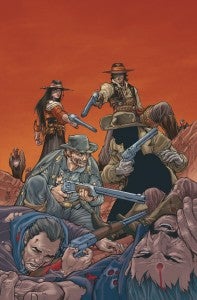 Booster's return to the New 52 was teased during a recent interview given by top DC brass, and a number of titles out in April have solicitation text that sounds like they could be a place for him to show his face. Is asking "which one?" even the right response? Could it be that Booster is popping up all over the place, perhaps setting the stage for some time- and multiverse-traveling shenanigans to come in the next few months?

Fans who felt the "gold" thing in #19 may have been a bit of a stretch, though, might find themselves a little more resolved to believe the hype following the solicitation text for #20, which says, "The future collides with the past in this issue as [REDACTED] causes problems for Jonah Hex."

Well, Booster Gold is not only from Hex's future (our present) but also from our future ,being that the character originated in the 25th Century. He seems like a decent candidate for either of those two solicitations, but taken together, it's hard to picture someone who seems like a better fit.

The interesting question will be whether Booster Gold, or Jonah Hex, or both, remember the interactions they had during Booster's second volume (which ended just before the New 52 launched). Being that he physically traveled through time to the Flashpoint Universe and then back home at the end, Booster is one of only two characters in the DC Universe (Barry Allen being the other) who are, physiologically speaking, the same person they were before the reboot. 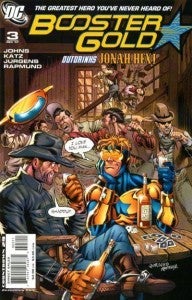 And, yes, that means this version of Booster is the same one who had a drinking contest with Jonah Hex and then--irony of ironies--drunk-drove his time machine into a fender bender with Barry Allen and the Cosmic Treadmill.

Is it likely there will be any reference to the previous encounter? Of course not, but consider this--while most of the DC Universe was affected by Flashpoint in part because their stories took place following Barry Allen's decision to change the past, Jonah Hex lived long before Barry Allen or his mother, and should therefore be semi-immune to the effects of the merged timelines.