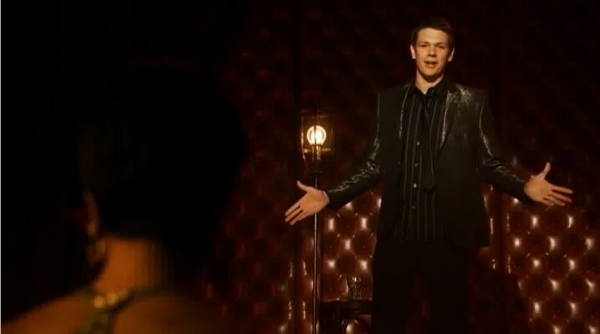 Everyone who watched Gotham last night is wondering, of course, whether a nightclub comedian seen trying out in Fish Mooney's back room might turn out to be The Joker.

And, y'know, not without reason; the show front-loaded a ton of cameo appearances, with The Riddler, The Penguin, Poison Ivy and more teased while a number of familiar faces on the Gotham City Police Department took on full-time roles right away.

Showrunner Bruno Heller hasn't been particularly helpful in trying to figure out just who The Joker might be in the show; while he's confirmed that he has plans for the character, he's been evasive as to just what those plans might be, saying back in May that the character would be brought in with "great care and a lot of thought."

In an August episode of DC All Access, the show caught up with Gotham producers Bruno Heller and Danny Cannon about just this issue.

"We do have an approach for the Joker," said Heller. "We have to keep our approach very close to our collective chest, because the Joker is, to a degree, the crown jewel of the Batman villains."

"We're lucky in that television now is binge-watched by a lot of people, and the slow burn is now necessary," said Cannon. "The great thing about the slow burn now is that we can take our time getting there and really draw people in, and earn the right to discover somebody who may or may not be the Joker."

Cannon, of course, directed the pilot as well as next week's second episode, "Selina Kyle."

Heller, meanwhile, has been a key creative force driving The Mentalist, and that long-running procedural had its own smiley arch-nemesis, Red John.

Red John, who as part of his criminal signature leaves a smiley face in blood behind at crime scenes, killed the wife and daughter of The Mentalist's lead character before the show started, and continued to be one of the show's key mysteries and antagonists through more than five seasons. When he was finally revealed in Season Six, many fans thought the series would end, its mission complete.

There's not much to suggest they won't do something similar with The Joker -- which would suit the character, whose origins change from each interpretation to the next and who is arguably best when we don't actually know who he is.

(The comedian there is clearly a riff on Alan Moore and Brian Bolland's The Killing Joke, which was an origin that gave us everything we needed to know except his real name.)

In any event, the answer here is...maybe? Whether he's The Joker or not, we won't find out anytime soon...and there will likely be more candidates between now and then.

Heller has recently admitted as much, hinting that fans will have to wait a while before they get answers.

"The Joker didn't think of his shtick all by himself," he told Digital Spy. "There must have been someone before who The Joker saw and thought, 'Oh, that's a good shtick. I could work with that and make it better.' It's the same with Batman. There must have been other vigilantes before him who didn't pull off such a good act. We'll play around with those ideas in Gotham.

"We're going to wait and get the show up and running. We want to get the story right and we want to be tonally right - and then we'll start thinking about how to bring him in. We will certainly try to surprise people, and maybe even trick people.

"It's one of those expectations that everyone will be waiting for, so you can't just present the guy with a big smile and start telling the story. Not that that would be dull, but that's one of those opportunities to really start playing with this.

"There are certain villains that can and do precede Batman," he added. "There are others that don't, and we'll play with that. Generally speaking, we won't go to the full theatrical, spandex costume aspect of the villains - the fully-fledged villains - because it's almost not consistent with this world."

One thing that Heller and Cannon don't have to worry about, that other comic book shows do: access to characters. Becuase it's a Batman show and Batman is the cash cow, it seems they've got basically access to everyone in Gotham from the comics, without having to ask permission for each use like Arrow, The Flash and presumably Constantine do.

Gotham: So...Was That Guy The Joker?