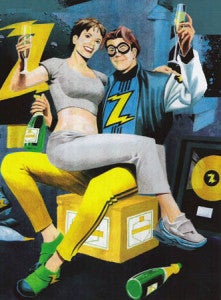 Since its original publication in the '80s and early '90s, Grant Morrison and Steve Yeowell's Zenith has been seen as a groundbreaking and fan-favorite superhero comic--but it's been years since any of it has seen print. That's because there's a dispute between Morrison and Rebellion/2000 AD, both of whom claim to own the copyrights (and by extension the reprint rights) to the character. The (overly-) simplified version is that the character was published in 2000 AD, and that most of the 2000 AD work is work-for-hire, so the publisher believed the rights to have been signed over as a condition of employment. Morrison, however, apparently never signed anything to surrender his rights and because other creators with special arrangements have been able to keep their rights in the past, says that the publisher cannot simply assume ownership. The case has never gone to court, with each party seemingly content to allow the property to languish rather than push the issue. A print run of Zenith graphic novels was pulped in 2001 following legal threats from Morrison, but Rebellion recently announced that they planned a limited print run of an omnibus edition, collecting the entire Zenith story. Morrison had not commented on the new printing, leading fans and reporters to wonder whether a deal had been struck, or he was considering legal action--and today he told The Guardian which. "Well, it's very simple," Morrison said. "We, uh, we spent five grand on lawyers' fees. They sent [Rebellion] letters. We were very keen to discuss it and we've never heard back from them. All I can say is that we tried to get into a discussion with them and they just didn't reply. I don't know what to do at this stage."