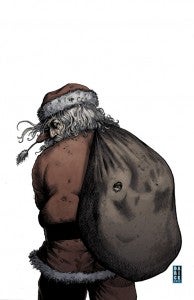 In a wide-ranging interview with Comic Book Resources that went live earlier today, superstar writer Grant Morrison announced that he'll be leaving Action Comics after issue #16 in January and Batman, Incorporated after the series' twelfth issue. He says that once he's done with those, he's ready to step away from superhero comics for the time being, focusing on creator-owned work for Image, Vertigo and other publishers.

Asked whether it was a bit of a surprise that he'd lasted as long as he had, Morrison told CBR:

The idea was always that I'd keep doing it as long as it gave me a lot of pleasure and allowed me to express myself . And it still does, but I can see the end coming closer. I'm coming to the end of long runs and stories I've had planned in my notebooks for years and the stuff I’m developing now is quite different.

The Action Comics run concludes with issue #16, Batman Incorporated wraps up my take with issue #12, and after that I don’t have any plans for monthly superhero books for a while. Multiversity is eight issues and I’m 30-odd pages into a Wonder Woman project but those are finite stories.

I'm not saying that I'll never write superheroes again. It's just that my relationship to them has changed especially after finishing the book and I’m not sure if I want to maintain the same kind of relentless level of production.

"The book" he's talking about is Supergods, Morrison's history  of the superhero in American comics, which just hit in paperback. The hardcover came out around the same time Morrison began his run on Action Comics, meaning that while he was writing a history and analysis of the importance of the superhero, the writer was working on ongoing series for both Batman and Superman.

Multiversity is his long-rumored crossover event, in which each of the eight issues takes place on a different world in the DC Comics Multiverse. For some time following Final Crisis, it was rumored that Jack Kirby's Fourth World characters--The New Gods and the like--were being reserved for Morrison to reinvent, although aspects of that mythology have already started to reappear in DC books, most obviously Darkseid, who appeared in the first arc of the relaunched Justice League by Geoff Johns and Jim Lee.

Prior to the release of the first issue of the relaunched Batman Incorporated, Morrison said on the DC blog that it would be "the final act" in his epic run on Batman, which has been going on since just after 2005's Infinite Crisis. During that time, he has co-written 52, written Final Crisis, killed Batman, replaced him with Dick Grayson and restored Bruce Wayne to the role. The series' third issue was scheduled for release on Wednesday of this week but has been delayed until August 22 following the attack on a Colorado theater that left 12 dead and more than 50 injured.

Morrison said that between reservations that DC/Vertigo tends to have about books that "put children in danger" and a creative renaissance at Image Comics in the last year or so, the time seemed right for he and Darick Robertson to take their new creator-owned series HAPPY! to the publisher.

"I've always put out my own books in tandem with the DC Universe trademark stuff I like to do, like JLA or Batman," explained the writer, "so in some ways this is business as usual for me. But there's definitely some kind of centrifugal movement away from the mainstream toward new and more personal, expressive, creator-owned stuff, and I think it's partly because cinema has appropriated so much of the stuff we’ve been doing in comics for the last thirty years. Movie superheroes finally look better than their comic book counterparts. And creative people are more informed and want to own their ideas, and to be able to protect them or profit from them. The audience has developed a fresh appetite for new characters and stories which is driving a shift toward those kinds of stories again. Writers and artists are experimenting again. The future’s back and you could feel the floodgates opening at Image this year, in particular. It seems like everybody’s got something new coming out."

Still, don't count the longtime DC writer (who has been working for the publisher consistently since his Animal Man run just after Crisis on Infinite Earths) out of the company stable just yet.  "I have more Vertigo stuff planned too," Morrison said. "I definitely feel the pull more strongly toward the creator-owned end of the spectrum and that seems to be the general consensus. I just read Ed Brubaker talking about his farewell to trademark superheroes and moving on to concentrate on developing his own stuff. So something's going on. Migratory patterns are changing. The superhero monthlies can always use new blood anyway."