Before Watchmen may be drawing to a close, but that won't stop Grant Morrison with playing with some of the same territory in his upcoming epic Multiversity, in which he's apparently planning on taking the Charlton characters into some decidedly Watchmen-like territory. 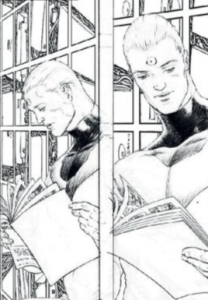 That's all well and good, of course; since Alan Moore adapted the Charlton characters into originals for Watchmen, it only stands to reason that a version of those characters could be used to explore some of the same territory as the 1980s masterpiece. There were a fair number of observers, in fact, that suggested this might have been a less controversial way of going about the whole Before Watchmen experiment.

Morrison talked to SFX about the upcoming first installment of Multiversity, centering around the Charlton characters and titled Pax Americana, in the issue currently on sale. "Watchmen was very much a response to the end of the Cold War," Morrison told the magazine. "We're now dealing with a new world of stateless terrorism, which gives you a whole new way of looking at that type of comic." He added, "With Watchmen there was a sense that it's the end of the world because of nuclear war, but it didn't so we're asking what happens when the world doesn't end? It keeps going, so you just have to deal with that, which is also more contemporary." 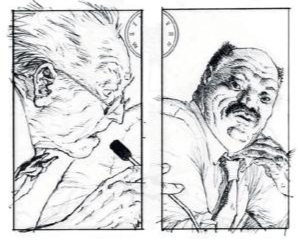 The magazine confirms that two of the chapters in the story will be Pax Americana, by Morrison and artist Frank Quitely, and Thunderworld (a take on the Fawcett Comics characters) with Seaguy artist Cameron Stewart.. "[Multiversity] was always the one that got pushed to the back because I had more immediate deadlines for everything else," explained Morrison of why it's taking so long to get the book produced, saying that each one-shot (there will be six, plus two bookends to tie their events together) will feature the work of a different artist. Morrison and Watchmen co-creator Alan Moore have had a long-standing public cold war of their own, which occasional flare-ups when Moore does interviews accusing Morrison of being, essentially, a poor man's Moore. Pax Americana, which hits later in 2013, probably won't do anything to solve that feud.