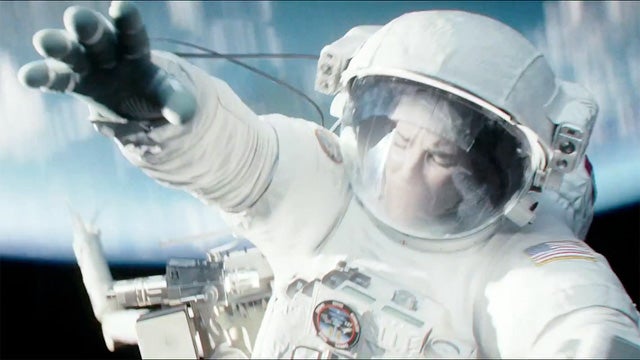 [If you want a pure film experience like I had - only seeing the very early trailer and nothing else don't read the rest of this review, wait until you go see it and come back to it. And I really mean GO SEE THIS FILM. There are no spoilers below but I can honestly say that not knowing some of the even simple plot points of the film made it just that better. Ok, so you've been warned... continue on -Zach]

I don't remember breathing for the first 10 minutes of the film. I must have, as I didn't pass out. But that's just how intense the opening minutes of Gravity are. You are there with Ryan (Sandra Bullock) and Matt (George Clooney) out in space and you think you're about to die.

Gravity opens with what seems to be a relatively standard spacewalk and repair of the Hubble Space Telescope in low orbit. The scenery is incredible - Carl Sagan's blue dot takes up much of the screen, alternating back and forth with the foreboding empty, but star filled, open space. Ed Harris, the voice of mission control keeps a relatively constant, but easy banter with Matt who is a seasoned veteran astronaut on his last mission to space. Meanwhile Ryan, a medical engineer on her first space mission  is trying to fix a component on the Hubble telescope. Emmanuel Lubezki's effortless but brilliant cinematography at first is reminiscent of his work with Terrence Malick in The Tree of Life - the camera has a ballet's performer's ease as it moves around the characters - until everything starts to go wrong (as things usually do in these films).

As you see in the trailers for the film - there is an accident, debris from a satellite going at an incredible speed destroys the space shuttle Matt and Ryan were supposed to go back to earth in.

I was quite apprehensive about Gravity - I am not really a fan of astronaut films (is that a genre?), unless of course they have some sort of quirk to them like say the film, Moon. (Moon admittedly did not meet my expectations but at least it tried). The combo of Alfonso Cuarón and Clooney and the overwhelming buzz for the film led me there anyway - and i can say that it was better than even my highest expectations.

George Clooney essentially plays the standard Clooney character - easy going, cocky (but lovable), there's not an incredible amount of depth to his character here but  he does it well. Sandra Bullock was the one that ended surprising me. While Clooney and Bullock may share credits on the poster - it's Bullock that carries the film and has by far the most screen time - and she owns every minute of it. She even succeeds in delivering a block of dialogue that I'm not sure how many other actresses could pull off without losing the intensity of the film and the pacing. I won't go into details as I consider it pretty spoiler-filled.

Alfonso Cuarón is the real star of this film though - somehow making everything work - the CG, the space, the writing (co-wrote the film with his brother Jonas) and pulling it all together in a tense 91 minutes. Between a romantic road trip film, post-apocalyptic films, and (the best) Harry Potter film - I'm not really sure what he can't do as a director.

If you haven't already gotten from this review - go see it. It's a must see.