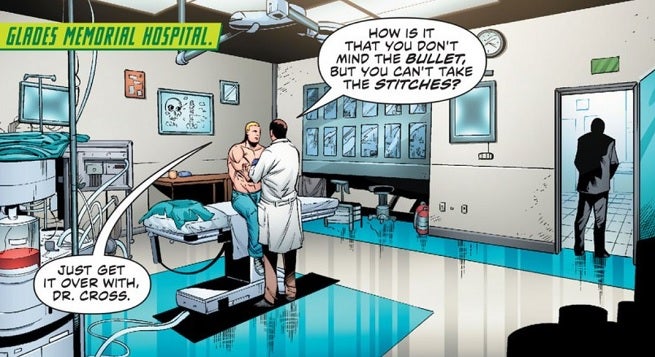 If you look back at comics news sites, fan message boards, Reddit and anyplace else where there is serious discussion about American superhero comics, one of the characters consistently noted as missing from the New 52 is Doctor Mid-Nite.

Three different versions of the character have existed over the years, but it's Pieter Cross, a surgeon who drew his inspiration from the original Dr. Mid-Nite, who had been appearing in Justice Society of America and Teen Titans prior to the New 52 relaunch and who seemed like the obvious choice for a spot in the rebooted DC Universe.

As far as I can tell, the character hadn't appeared yet (no New 52 history for Dr. Mid-Nite is listed on his Wikipedia or DC Wiki entries)...until this week.

(And, by all means, let us know in the comments if he's appeared before and nobody noticed or cared enough to put it on the Internet!) 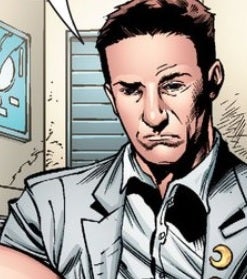 ...although what it actually means in this universe, where there was presumably not a prior Doctor Mid-Nite to inspire him, is anybody's guess.

The issue, written by Arrow's Andrew Kreisberg and Ben Sokolowski, had attracted the attention of fans for seeming much more TV-inspired than previous iterations, with Diggle being essentially Oliver's only support system, the first appearance of the New 52's Felicity Smoak and a well-dressed villain who reminds a bit of the first season iteration of Malcolm Merlyn (a well-dressed torturer).

So, of course, the next question might be: will we see Doctor Mid-Nite on Arrow?

Green Arrow #35 Seemingly Snuck Dr. Mid-Nite Into the New 52 and Nobody Noticed