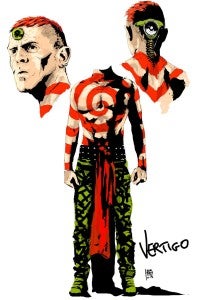 With the character playing a key role on The CW's Arrow and Jeff Lemire's Green Arrow feeling more and more like the TV series, it's probably no surprise that Green Arrow #22, due out in July, features the first appearance a version of the character reinvented for the New 52. He's certainly got the look of a more "super" villain than what we see in the TV series, though, so don't go assuming that just because he's younger and popular from TV that we'll be getting a comic version of Seth Gabel. "Count Vertigo's debut in Green Arrow #22 will turn Oliver Queen's world upside down once more," said DC's Bob Harras. "After Ollie takes something precious away from Count Vertigo, this new adversary will stop at nothing to track him down to get revenge and take back what he feels his rightfully his. And you especially won't want to miss the showdown between these two, as its grave consequences will have very substantial and lasting effects on Ollie going forward. Below, check out series artist Andrea Sorrentino's awesome design for Count Vertigo, and notice the device mounted to his head that holds his power! (Yikes!)"

Oreo Teams Up With Barefoot to Release Cookie-Inspired Wine