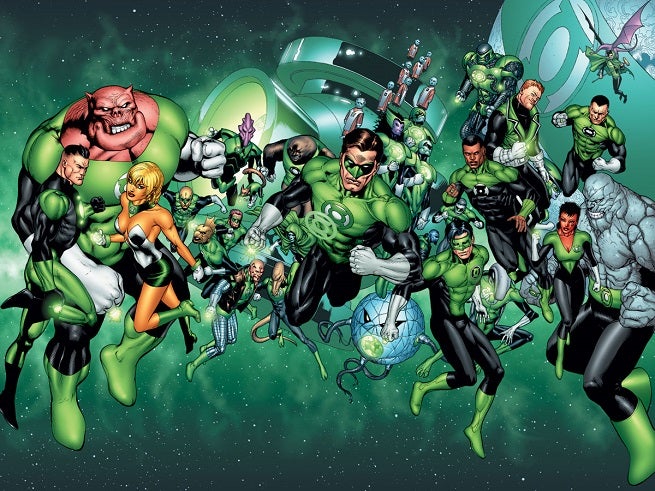 It's probably not surprising that as we get further and further out, less is known about the DC Comics movies announced yesterday at a Time Warner corporate event.

Kevin Tsujihara, CEO of Warner Bros., was expected to talk about Justice League but instead announced ten films, with the additional mention that Batman and Superman would get stand-alone films not currently included on the schedule.

Once 2020 hits, there are two movies currently planned -- Green Lantern and Cyborg -- and while we know who Cyborg will be, since he was already cast for Batman V Superman: Dawn of Justice, we don't in fact have any idea who Green Lantern is or, indeed, anything about the film other than the fact that it exists.

Nikki Finke, veteran entertainment journalist and founder of Deadline, reported a few months back a slate of films she claimed would be Warner's Comic Con Internatinoal: San Diego announcement. At that point, she said that a Flash/Green Lantern team-up movie was in development, but on the boards presented to Warner stockholders, each of the Justice League members gets their own movie -- even Green Lantern, whose last film was famously a dud.

More recently, a reporter for the Wall Street Journal identified Green Lantern as a "reboot," suggesting that they'd make no effort to tie into the Martin Campbell-directed film starring Ryan Reynolds.

Other DC movies in the works: Cyborg, a Green Lantern reboot, and new stand-alone Superman and Batman movies

That's no surprise to anyone paying attention, as it's been implied a number of times, but having somebody with apparent inside information (his paper was the first to report Justice League officially, after all) has given it a sheen of officialdom.

We don't know what Green Lantern will appear in the film, of course; Hal Jordan, John Stewart, Kyle Rayner and Guy Gardner all have their fans and their advantages. It seems most likely that it will be Hal, since he's the lead in the comics and since Warner can't be too concerned about brand confusion since they're apparently making a The Flash movie with Barry Allen at the same time a different actor will be playing the same character on TV.

Of course, with Geoff Johns steering so much of the DC Entertainment ship and a Shazam movie that will apparently star Black Adam as much or more than Shazam, it could be that the Green Lantern we meet in Justice League -- if that is indeed where he will make his debut, as reports indicate -- will be Sinestro.

Black Manta Gets His Own Aquaman Spinoff Series From DC Comics

Amouranth Hits Back at Criticism Over Controversial ASMR Twitch Streams