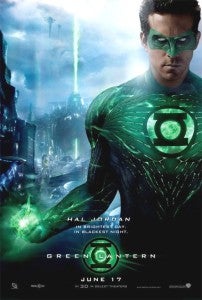 Green Lantern is shaping up to be one of the most hyped movies of the summer. The Green Lantern movie officially hits theaters on Friday, June 17, and several theaters are having midnight showings on Thursday night. However, some lucky people will get an early view of the Green Lantern movie, as the world premiere takes place in Hollywood at Grauman's Chinese Theatre on Wednesday, June 15.