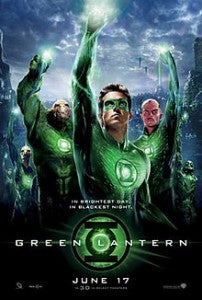 Iconic DC superhero Green Lantern has one of the most interesting powers in comics. His green power ring can materialize anything that he can imagine, using strictly willpower as the main fuel. There are glimpses of the power of that imagination present in the Green Lantern origin film, with Ryan Reynolds playing the cocky fighter pilot turned hero Hal Jordan. Overall, however, the film lacks significant depth in regards to exploring the power and potential of the Green Lantern as a hero, instead spending time on unnecessary back story and romantic drama.

The film effectively sets up the vastness of the Green Lantern universe, giving a succinct origin to the Green Lantern Corps, the power rings and the origins of the villain's film, Parallax, a being driven and powered by a hunger for fear. The film does a good job of giving us a sense of history of the Corps and their role as "space cops" for the galaxy. Quickly shifting to Earth, the audience meets Hal Jordan, a cocky and brash pilot who few at Ferris Aircraft, the company he works for, seem to respect or like, especially given how he botched a test run for a new jet. Carol Ferris, played capably by Blake Lively, is a former love of Jordan's and is his only apparent advocate, despite their rocky past.

Green Lantern Abin Sur crashes to Earth after an encounter with Parallax and seeks out a new, worthy being to take his place as a Lantern. The ring chooses Jordan for his will and he quickly becomes the newest member of the Green Lantern Corps. Over the course of the next several minutes of the film, Jordan quickly learns more about the Corps, his place amongst this group of warriors and the ways in which he can manipulate his power ring. All of this takes place under the critical eyes of fellow Corps members Kilowog, Tomar Re and of course Sinestro, played effectively by Mark Strong.

It's in the scenes when Jordan is using his power ring that the movie is most effective, as the power of the imagination comes to life with the embodiment of green energy. The scenes are also fast paced and rely just as much on wit and quick thinking as they do on the power of the ring itself. What follows are scenes that peak and scenes that plummet, as Parallax makes his way across the galaxy and is drawn to Earth, thanks to Dr. Hector Hammond, a scientist who is affected by a part of Parallax while examining Abin Sur's corpse. The scenes between Lively and Reynolds are predictable and rushed, as the film goes from bitter, cutting remarks exchanged between the characters in the beginning to "can't live without you" platitudes towards the end.

The inevitable battle with Parallax is a great display of the film's believable CGI and the place where Jordan finally proves himself worthy of the Green Lantern title. The final battle feels very rushed and pat, as if the story's writers felt the need to sprint to the finish just to bring some closure to what becomes a tale of too many sub plots. There are plenty of hints dropped in regards to a potential sequel, especially for savvy fans of the comic book series who recognize those hidden references.

The film's highlight is Reynolds, who aptly embodies Hal Jordan and all his skill and smarts masked behind a thick layer of smarm. His character evolves over the course of the film, but is handicapped by a lazy back story about his dead father, which falls by the wayside as the film goes on. The cast sports a surprisingly impressive list of actors, with Tim Robbins and Angela Bassett making appearances that they are too good for in an uneven film such as this. Peter Sarsgaard makes an effective and creepy Hector Hammond, and Strong as Sinestro brings calculating cool to the role. More attention to the true power and amazing potential of the ring itself and Hal's growing mastery as a ring wearer would have helped this origin story soar rather than putter along under the weight of predictable and distracting side stories.

Here's hoping that the sequel (if there is one) utilizes the good points of the film that worked and sheds the distractions.