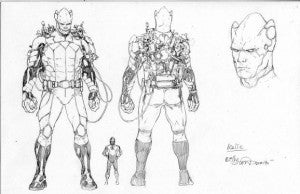 DC Comics have unveiled a first look at Relic, a new intergalactic villain set to terrorize the Green Lantern titles in the months following the end of Geoff Johns's epic run on the titles.

"As a new era begins for Green Lantern, a new evil rises to face him," DC's Bob Harras said. "Check out the design by new Green Lantern artist Billy Tan."

He's apparently a pretty big dude, too--if you check out the character designs at left, you'll see that a Green Lantern stands knee-high to this guy.

During Geoff Johns's run, he added a lot to the mythology but for the most part used or expanded on existing villains for the series. What do you think of the next group of writers coming in and right away setting GL up with some fresh faces?