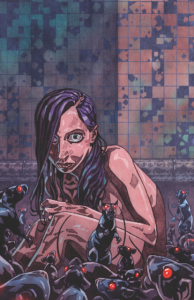 Featuring art by Toni Fejzula, Dark Horse says the five-issue limited series serves as a complement to their other female-lead action stories like Buffy the Vampire Slayer and Ghost.

The premise: The story opens when a beautiful girl wakes up in an abandoned subway station with no memory of how she got there. When men try to hurt her . . . they wind up dead. Where did she come from? And what is she capable of?

“I’ve been tossing the idea behind Veil around for over a decade, seriously, but it wasn’t until Scott Allie pulled the string on it that it came to life,” said writer Greg Rucka. “It’s a very different kind of tale for me, very different in what I’m trying to accomplish, and working with Dark Horse, working with Toni, is a rare opportunity to try to bring this thing to life. The opportunity Dark Horse is providing us is amazing.”

“There are a lot of characters in comics that are very dangerous, and a lot that bring danger with them wherever they go. Veil gives that concept a whole new and very deadly meaning,” said Dark Horse’s editor in chief, Scott Allie. “I don’t know if I can classify her as an antihero. But she’s a character that’s going to surprise you in a lot of ways. Greg does gritty urban drama like no one else, and here he’s adding to it some things you’ve never seen from him before.”