The Guardians of the Galaxy and Spider-Man, two properties who will have feature films coming to cinema right around May 2014, will be the features in that month's Free Comic Book Day offering from Marvel Comics, writer Brian Michael Bendis told Newsarama.

As seen in the cover at right, the Guardians of the Galaxy feature will see Captain Marvel join the team--something that's already been revealed--but also another, shadowy figure. Our first guess, based on the silhouette alone, would be Cable.

Cable, currently leading X-Force, will also be appearing in a film not too long from now. He's also the son of Cyclops and the grandson of Corsair, a longtime space pirate and frequent member of the Marvel Cosmic cast. 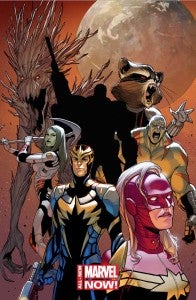 “With [artist Nick Bradshaw] joining the all-star creative team of Brian and Sara Pichelli, Guardians of the Galaxy promises to be the book that Marvel readers will be talking about all the way through the the opening of their movie in August,” Senior Editor Stephen Wacker said. “And with two new members causing all sorts of problems, the galaxy’s least likely super hero team is going to find itself in a whole mess of trouble.”

Dan Slott and Giuseppe Camuncoli will write and draw the Spider-Man feature which, with the film in theaters and a major story presumably kicking off around Free Comic Book Day, will defy all fan expectations if it doesn't feature Peter Parker back in the title role.

Guardian of the Galaxy will open in theaters on August 1, 2014. The Amazing Spider-Man 2 will open on May 2, 2014, the day before Free Comic Book Day.